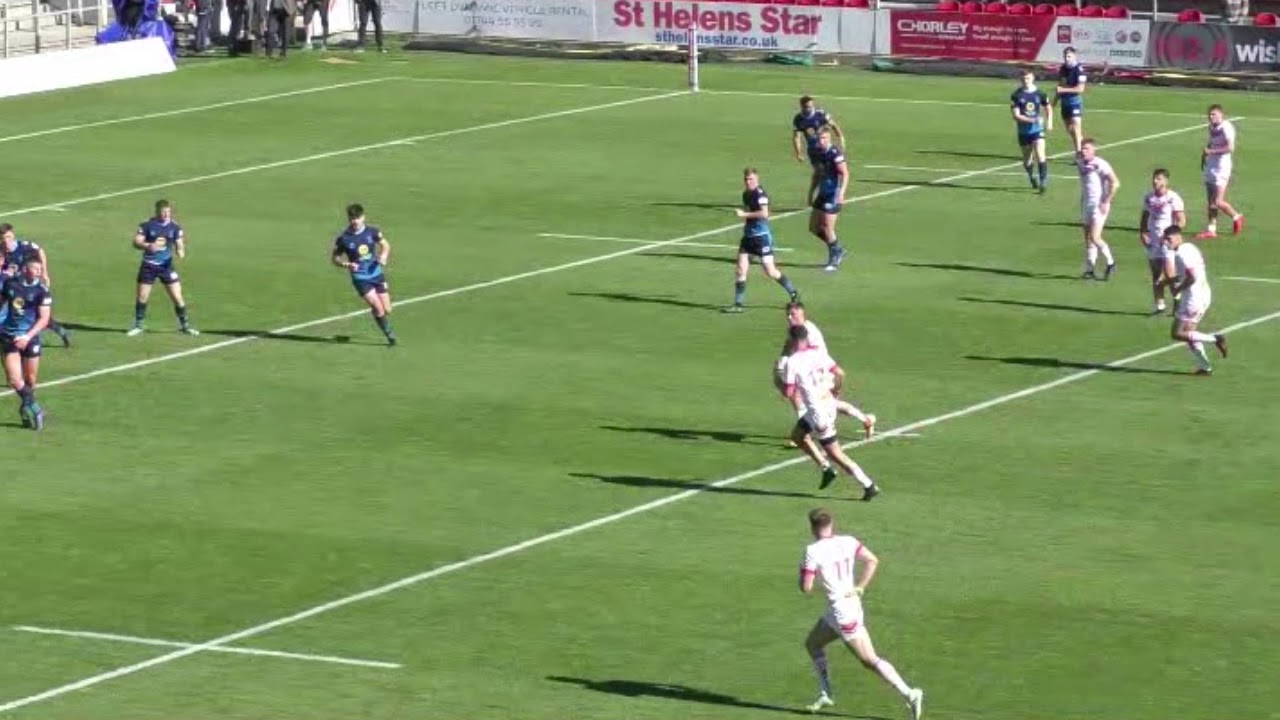 WATCH: U19s lose out in the derby

The Saints, missing a number of Academy stars, were first on the board in the seventh minute as Nico Rizzelli bumped off his would be tackler to score in the left corner. This after a Jamie Pye drive and Jack Welsby being tackled short of the line.

Lewis Dodd extended the lead to six points five minutes later converting a penalty 20 metres out in front of the sticks for holding down in the tackle.

The Saints were carrying out the game plan to the letter forcing the opposition to come out of their own end, but a Welsby kick went out on the full and put the visitors on the attack and despite a hint of obstruction they scored under the posts to level the game.

A characteristic Welsby run saw the stand-off held up over the line, but four tackles later on the last, he embarked on a run first to the right and then back to the left before dummying his way over in the left corner.

As the half wore on it was the Saints who were in the ascendancy causing their bigger opponents to do most of the tackling.

With three minutes left on the clock the visitors kicked dead on the last and from the restart, first John Hutchings, then Josh Simm drove the Saints into the opposition half. From the play the ball Welsby carried the momentum on finding Dodd in support. He in turn put Matty Foster through and it was his over head pass to Jumah Sambou which the winger took and stepped his way through to score. Dodd converted and the Saints were 10 ahead at the break.

More of the same was the call for the second half but within five minutes all had changed as two quick tries saw the game level.

But back came the Saints. On 50 minutes Dodd had a try disallowed for a knock on short of the line when it looked certain he had scored.

But two tackles later and heavy tackling forced the error, Josh Simm picked up and strolled in. The normally reliable Dodd missed the kick, but the Saints were back in front.

Unfortunately, two more errors from the Saints resulted in two converted tries and the Saints found themselves chasing the game two scores back.

They get one of them back with 10 minutes to go. Dodd’s great kick on the last coupled with a great chase saw a repeat set and on the last Welsby found Simm who ran over the top of his opposite number to score.

This see-saw game wasn’t finished, however, as this time the visitors knocked on from the restart. From the scrum Welsby again found his way over the line, but couldn’t get it down. Instead he flicked out an overhead pass taken by Lewis Baxter who brought the Saints within four again.

Try as they might in the final four minutes the Saints just couldn’t quite get over the line and a runaway try gave the score an artificial look.

Despite fielding a very young side the Saints gave one of their best displays of the season and were unfortunate in defeat.