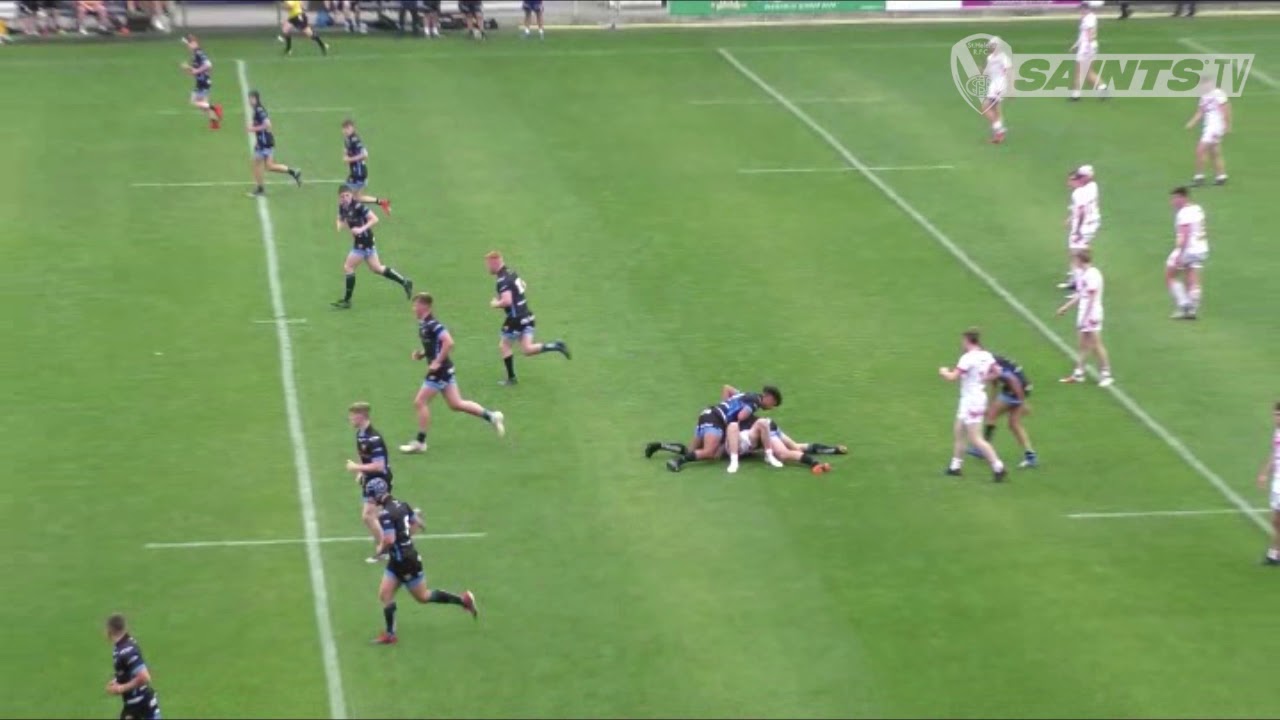 The Saints were out of the blocks much quicker than the Giants and were and went 10 points to the good inside the opening six minutes.

A Daniel Moss kick on the last was spilled by the Giants fullback. From the resulting scrum drives from Shay Martyn and Jack Green set up the position for Moss to go left and dummy his way over in the corner.

From the kick off, Reece Sumner showed his undoubted potential. Captain Joe Woods drove the ball in well and from the play the ball Taylor Pemberton spotted a gap down the left touchline. He fed Sumner 80 metres out who beat the defence on the outside before also skinning the covering full back in the same way.

A good covering tackle from Ellis Keppel saved the Saints blushes as the Giants dropped the ball over the line. From the resulting seven tackle set the Saints drove deep into Giants territory before getting a penalty on the last for interference. Green was held short before Moss’ weaving run saw him put Kallem Rodgers over in the corner.

The point-a-minute Saints were over again on quarter time with Moss scoring his brace. Ben O’Donnell, Keppel and Woods put the Saints on the front foot before the recently introduced Cole Appleby blazed a hole in the defensive line. He took it to the fullback, but sensibly saw that although he could probably have scored Moss would certainly score from his pass once the fullback had been committed.

Moss again was at the heart of Saints fifth try as his delicate chip on the last was allowed to bounce by the Giants. It reared back towards the Saints only to be knocked on by the retreating defenders, Martyn reacted quickest flicking a pass out for Rodgers to go in for his second.

O’Donnell was held up and Rodgers missed a try before Sam Haynes scored his first and the Saints sixth. Another barnstorming Appleby break down the middle was stopped, but from the play the ball Moss and Keppell went right feeding Haynes who stepped off his right going in with three people on his back. Martyn took over the kicking duties landing a great conversion from the touchline.

The resumption of the second half seemed to bring more of the same with Martyn going in for his brace on the Saints first set of the half. An Ellis Archer high ball was dropped by the Giants and after Keppell and Appleby had been stopped short Martyn wen in at the corner.

But despite Woods, Appleby and O’Donnell again being held up over the line and Green having a try ruled out for two in the tackle the Giants responded.

On the hour the Giants took advantage of some missed tackles on the line to open their account. 10 minutes later they were in again, before the Saints finished well as Appleby showed his power in defence pulverising his opposite number into a knock on in the Giants red zone.

From the scrum the ball was moved right to Haynes, now in the centre, and he dummied his way over with the last play of the game.