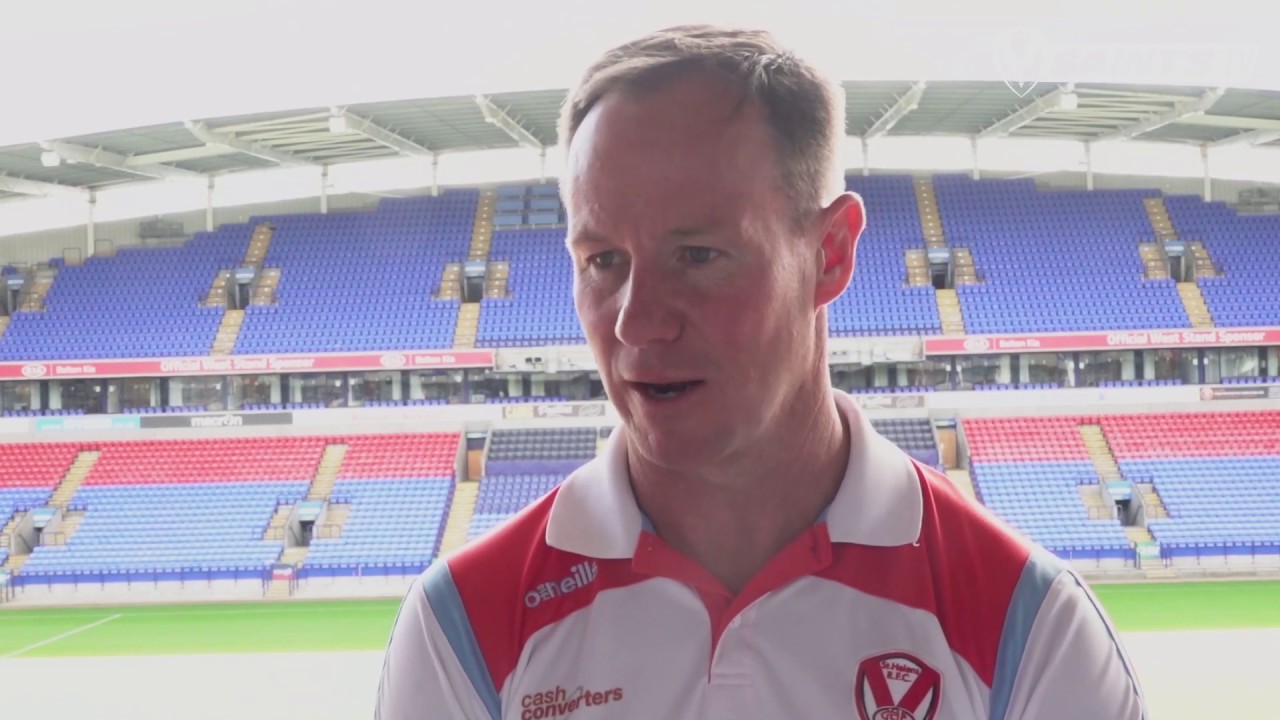 WATCH: Holbrook says everything is at stake on Saturday

There is also some early squad news involving James Roby and Lachlan Coote in the interview below….

Saints head into Saturday’s Semi-Final at the University of Bolton Stadium knowing a win over Championship side Halifax will mean a first Wembley appearance for 11 years.

And at a joint media event at Saturday’s venue, Holbrook believes this is the start of an exciting run of fixtures and believes it will be a proud moment if we can get the victory.

“It is coming at a great time of the year. We have put ourselves in a really good position in the Super League table and now there is six games to go and now we get a little bit of added excitement of throwing in a Challenge Cup semi knowing that if we are good enough to win we get to Wembley in another three weeks time.

“We have done all the hard yards to date and we have got the exciting games in front and I want us to really look forward to this. The club hasn’t been to Wembley for 11 years and given the great history of our club in the Challenge Cup and the fact our fans haven’t had the chance to go to Wembley for a long time [it means] everything is at stake on Saturday and we know that so it will be a real proud moment if we can get the win against Halifax and get there.”

Saints lost out last time we were in Bolton after Catalans Dragons progressed to the Challenge Cup final and Holbrook believes Saturday’s clash is a great chance to put last year’s defeat behind us once and for all.

“Everyone knows this time last year we got beat in the Semi Final and whenever you lose something or don’t do something great, you want to have another crack at it and we have had to wait 12 months and it’s exciting it is finally rolling around again, he continued.

“After the Quarter Final win you have got to wait 8 or 9 weeks before the Semi which is hard, but the boys have handled it well and it has finally rolled around and we are looking forward to it.”

Holbrook is well aware of Halifax’s dangers, but admits it is more important Saints concentrate on ourselves.

“We have been looking at them really closely and I will [continue to] over the next couple of days. We have got to be well prepared for them and know their threats. But at the end of the day, it’s about us. We have got to come here Saturday, knowing what is at stake and we know we want to get to Wembley and that is all the motivation we need. We have got to play well on Saturday and we will all be doing our best.”

On the injury front, Holbrook admits his senior players, including captain James Roby, will likely return. The only player unlikely to feature is full back Lachlan Coote who is still recovering from a knee injury he picked up in the win over Wigan.

“We are looking all good. Obviously it was a tough game, physically as we expected in London. Cootie [Lachlan Coote] is unlikely to play, but everyone else should be OK.

“I have a couple of ideas [to fill in at full back if Coote doesn’t play]. Jonny Lomax is equally as good at full back or stand off and young Jack Welsby is an exciting young player and Matty Costello has played heaps at full back so we have got a few options to consider there and we will work that out over the next couple of days.

“It will be great to have Robes back. Obviously we wanted him to play against Wigan, but he didn’t get through training great and he was still a bit sore last week so to get him 100% for our biggest game of the season here on Saturday is the main thing and he should be right to go.”

Tickets for our Coral Challenge Cup Semi Final against Halifax on Saturday (KO 4:30pm) at the University of Bolton Stadium and are still on sale online here.  We are also now offering ‘What If’ forms for 2019 Members who have an exclusive opportunity to pre-book their tickets for the Coral Challenge Cup Final IF we beat Halifax.