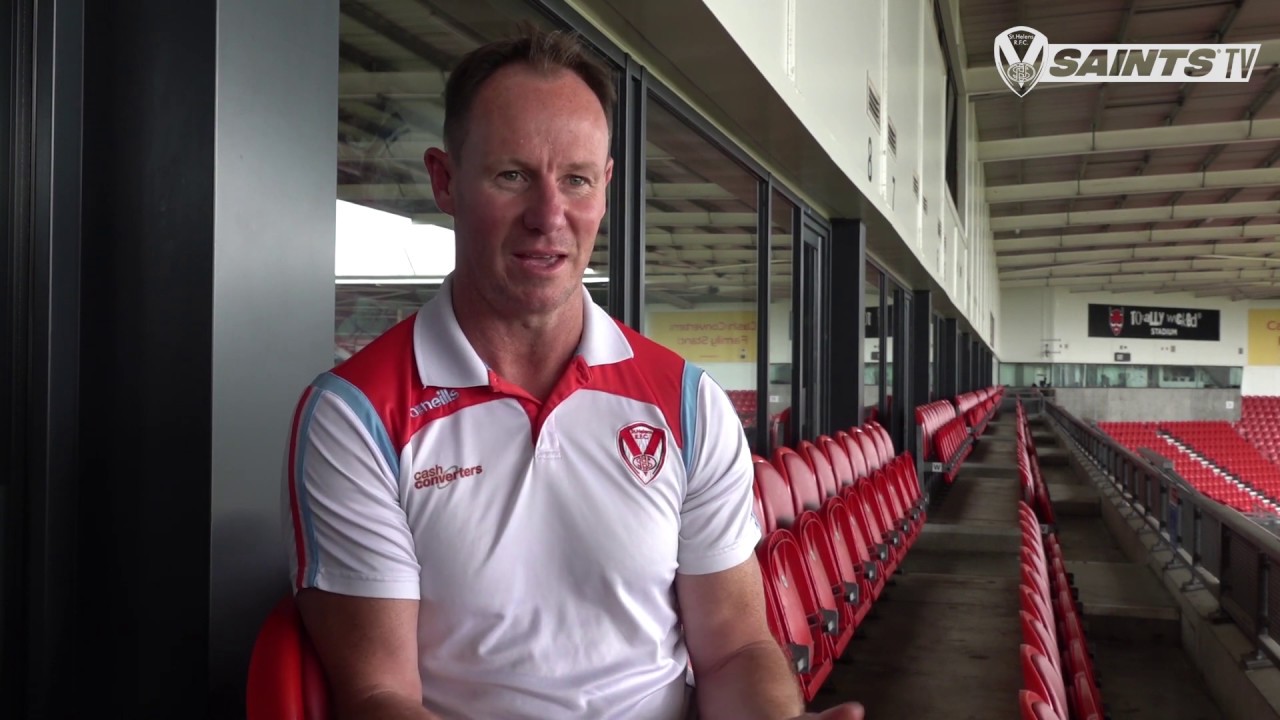 WATCH: Holbrook insists focus is now on big games that lie ahead

The club revealed earlier today that Holbrook is set to leave the club at the end of the season to take up the position of Head Coach at NRL club, the Gold Coast Titans.

And in an exclusive interview with the club, Holbrook has shed some light on the timing of the announcement, whilst reiterated that it was a hugely tough decision and admits he and the players are now fully focussed on the big games Saints have ahead, none more so than a trip to Wembley.

“It was a really tough decision for me and an awkward one, he said. “I spoke to the Gold Coast last week and they told me they’d make a decision over the weekend and let me know Monday and that was the truth and the funny thing is when I found out myself on Monday everyone else found out as well.

“People think I’ve known for ages and it’s quite weird because it’s through the media they know just as quick as you do. I only signed yesterday [Tuesday] and I only got to tell the playing group this morning hence why the club only announced it today. So it’s not something that I’ve known for long.

“I said to my wife; it’s hard because we’re all happy here and she was happy either way and I just said look I think if they offer it to me [I have to take it] because it’s what I do want to do. I do want to coach in the NRL and unfortunately for me it’s only when we’re doing well that I’m going to get the opportunity to go. So I have to leave when everything’s going well otherwise you don’t get the opportunity. So that’s the hardest thing. I do love it here and I always have, but I do want to coach in the NRL so that’s the only reason why I’m leaving here because it’s been great for me and my family.

“I told the players this morning, but as you know they already knew through it coming out early, but I had actually only signed yesterday. I didn’t want to get the players in yesterday as it was their day off and the last thing I wanted to do was say ‘everybody come in to training, oh and by the way I’m going’ because it’s not a good thing.

“It’s a great feeling knowing we are going to Wembley, so we can now forget about me. Lets not focus on me, lets focus on the team, the town and the club. We’ve got some big games coming up and all our focus will be on those big games and it’s just great that we’re there [at Wembley].”

Holbrook admits the pressure on the shoulders of the players has now been lifted as we secured our spot at Wembley.

“It’s a lot of pressure off everybody and particularly the players. We went into a semi final with everyone saying we’re just going to win easy and they’re tough games to play in and a lot of what Wilko [Jon Wilkin] said when I watched the game back was right.

“Championship players are as strong as Super League players, they do as many weight sessions they’re just not as skillful and unfortunately with the conditions the way they were, we tried to be more skillful than them and it didn’t work, but we settled down in the second half and got a good win and a lot of pressure off the players shoulders. We all know we’ve got the semi-finals wrong in the past so to be at Wembley finally is great news for everyone, and I’m relieved and also excited and I just can’t wait to play.”

Before that, Saints are back in Super League action on Friday against Wakefield at the Totally Wicked Stadium with kick off at 7:45pm and Holbrook is well aware of the dangers that Trinity will pose.

“They’ll be down here looking for points. A couple of weeks ago against Wigan they did look tired, they needed a rest and they got that rest last week so for them it is dangerous times. Six or seven weeks ago they were talking about playoffs and knocking on the door there and unfortunately for them they’ve slipped back near the relegation area so they’ll come here really determined and we’ve got to be ready for that.

“They have some good players we need to keep an eye on and on their day they’re as good as any side, they’ve just been inconsistent and have had a few injuries so they’re going to be tough opposition on Friday.”

Saints’ 19 man squad was named earlier this week and Holbrook has shed some light on how long Alex Walmsley and Morgan Knowles may be missing for, whilst there was an insight into who may play at full back this week.

“Morgan Knowles and Alex Walmsley missed out on the 19 man squad this week and hopefully they’ll [only be out] for a couple more weeks. Alex picked up his eye injury unfortunately against Halifax so he’ll be a couple of weeks and Morgan Knowles will probably be the same. It’s great that we’ll get Zeb Taia back this week. He’s missed five or six weeks so it’ll be great to have him back this week.