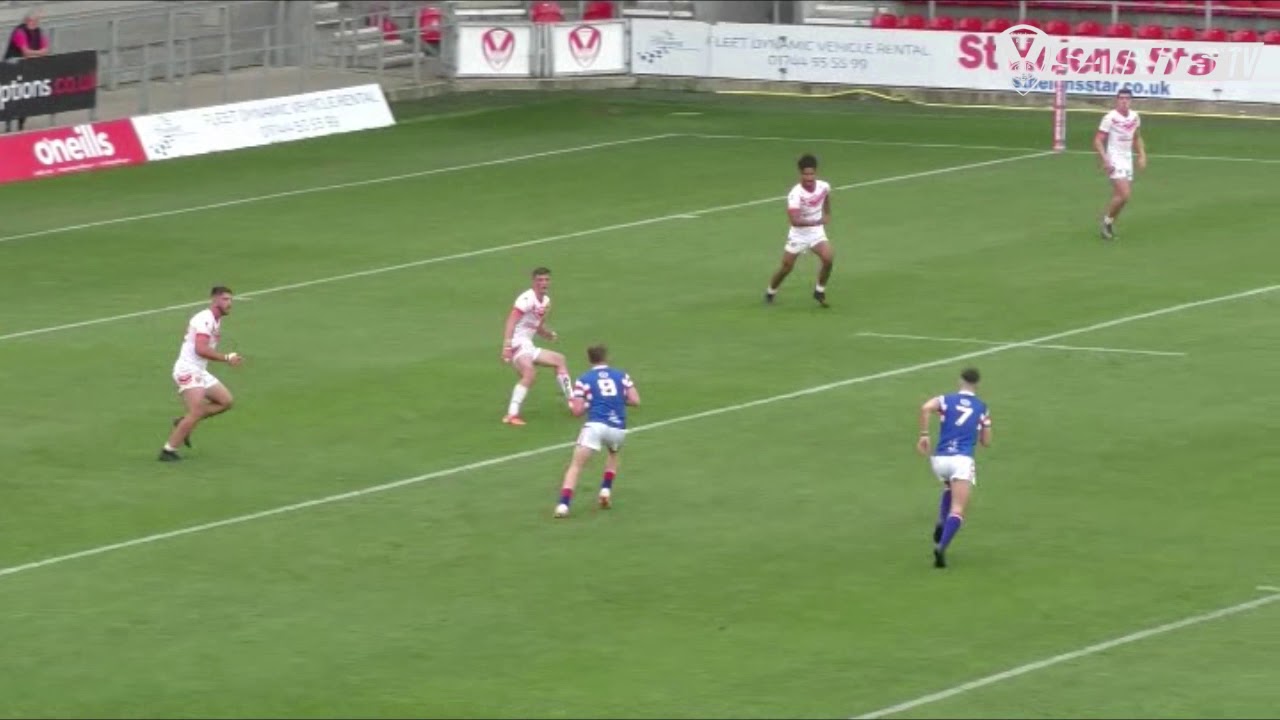 WATCH: Saints U19s make it a hat-trick of wins over Wakefield

This match definitely came down to the survival of the fittest as both teams were down on players from early on with the Saints playing the final 30 minutes with only 14 fit bodies.

Having said that, the determination shown by all the Saints players to come away with the points was what ultimately won them the game.

The Saints started brightly with Lewis Dodd kicking a sublime 40/20, but the resultant attacking play broke down as Matty Foster lost the ball over the line.

Not to be deterred, the Saints kept on pressing earning a penalty to put them on the front foot. Three tackles later and big prop Harry Brooks ran a blockbusting line to register his first senior try in the red vee.

Both sides were feeling the muggy conditions, but the Saints were coping slightly better and on 25 minutes Harvey McDaid crossed, only to be denied the score for obstruction in the build-up.

Lady luck was smiling as the charged down kick resulted in a fresh set of six and four tackles later Saints’ Matty Foster was stepping off his right foot to cross for yet another try.

The second half started with a knock on, on the half way line. Wakefield then won a penalty and three tackles later Trinity were back in it as the big second row ran through some weak tackling to score.

The visitors were their own worst enemy, however, gifting the Saints possession on the fifth tackle on the Saints 40. Drives from John Hutchings and Jumah Sambou put the Saints in position and on the last Dodd created a bit of magic with a perfect grubber which rebounded off the posts into the arms of captain Sam Royle to score.

From the kick off the Saints were on the attack only for Dodd’s crosskick to be plucked out of the air by the Trinity stand-off who set off on an 80-metre run. But he was miraculously caught from behind by an heroic defensive effort from Foster tracking back.

The Saints regrouped with a great defensive stint on their line only to be suckered on the last tackle from dummy half at the line.

At this stage Trinity looked like the could kick on and win and they drew level just before the hour.

But five minutes later Saints dug in and were rewarded. Drives from Royle and Lewis Baxter coupled with two penalties had the Saints breathing down the Wakefield necks and on the last it was another Dodd grubber which unpicked the lock, the ball sitting nicely for Josh Simm to touchdown.

With 10 minutes to go Brad Holroyd was denied the match winner as he was adjudged to have put a foot in touch on the way to his dive in the left corner, but minutes later he got his just rewards crowning a good performance with a try stepping off his left to go in after good work again from Baxter and Royle. Dodd’s fifth goal put the icing on a very tough cake.