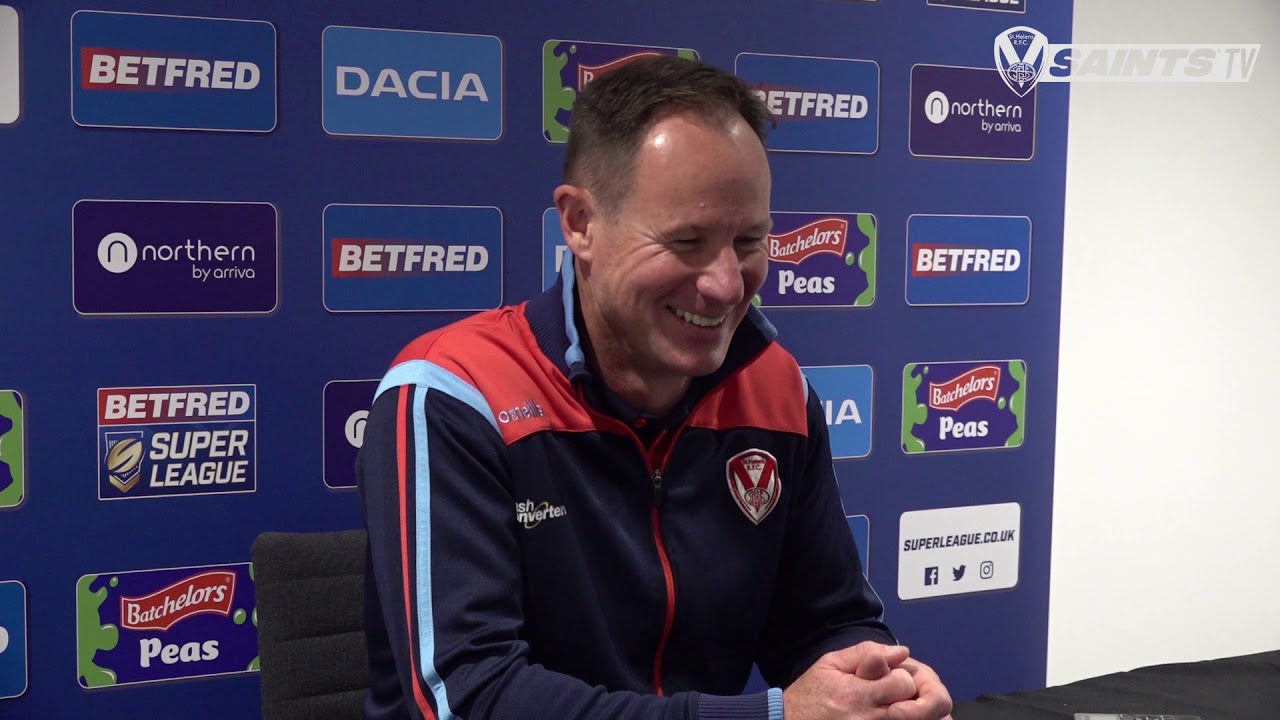 WATCH: Holbrook proud of players and injury news ahead of Wembley

Red-hot Saints, missing a host of first team stars, secured another dominant 36-20 victory, this time over a resurgent Leeds Rhinos, with the Coral Challenge Cup Final at Wembley up next.

And Holbrook praised his players attitude given the League Leaders’ Shield was wrapped up a few weeks ago with a Wembley Cup Final on the horizon.

“It was a great win for us tonight and a very pleasing result. It is a difficult period that we have had to go through, but full credit to the playing group they have delivered every week and this week harder again as we had a few guys missing, but everyone stood up and wanted to continue our good run of form and we did it again tonight against a dangerous Leeds side.

“We know how well they have been playing the last few weeks. We had players playing bigger minutes and bringing players off and switching positions in the game, but the players got on with it but I am really proud how we have got on with the last few games and in particular tonight.

“Every time they [the squad] have been called upon they have been great and they were again tonight. Matty Lees really stood up for us. He played about 60 minutes straight and obviously Kevin Naiqama did some classy things so I thought those two were brilliant but everyone just worked so hard and were great.”

Matty Lees picked up a knock in the hip area in the win, but Holbrook has revealed he should be fit for the Final next week alongside the rest of his senior players.

“I think he [Matty Lees] will be alright, but copped a knock but he should be OK. They [the missing players] will be all right to play next week which is great.

“I just wanted to play well tonight which we did and I will have a think about my team for Wembley on the way home. It’s so hard to try and not get ahead of yourself and it is a great distraction to have, but that’s why the players deserve a massive rap tonight because it can be an awkward game to play in knowing next week’s occasion.”

On the Coral Challenge Cup Final, Holbrook said: “I know Warrington will be confident, they are a confident club, regardless of how they play tomorrow night [against Wigan] so we are well aware of that.

“We have given a lot young guys opportunities and everybody is fresh and everyone who gets a jumper is playing great for the club and we are in a great spot there is pressure on us next week but there is pressure on Warrington as its the Challenge Cup Final. They lost last year so they have their motivation. It’s going to be a cracking game next week and we will concentrate on that now.

“It means a lot to everybody involved in the club and the town, in particular the players, I would love to lift the trophy with them, but we have to play well next Saturday. It is great to be 16 points clear and all that but it comes down to playing well next Saturday and we are clear with that.”

Tickets are on sale for Thursday night’s clash with Leeds, our Wembley clash and our home tie with Castleford Tigers where we will lift the League Leaders’ Shield, by clicking here.