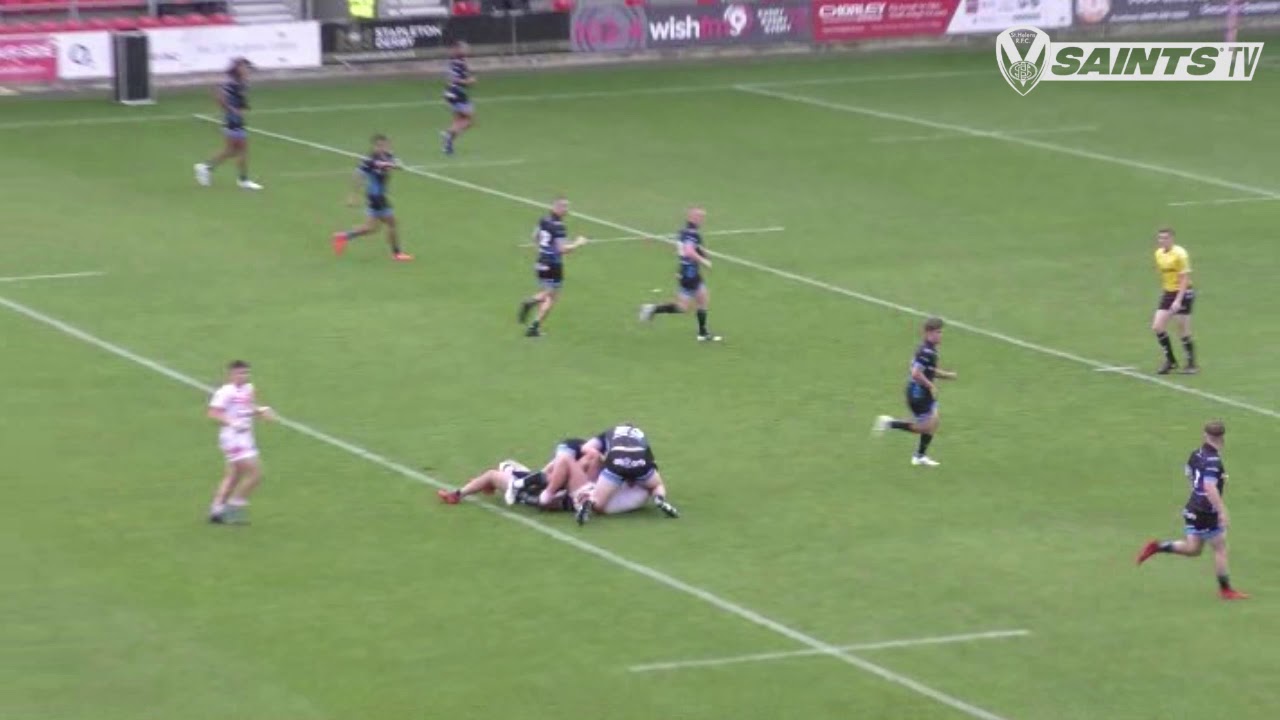 The Saints raced into a six point lead after only two minutes. A great kick from Lewis Dodd put the Gants onto their try line and on the second tackle great defence saw them tackled in goal. A John Hutchings drive took the Saints close but on the second Harvey McDaid’s inside drop off saw Matty Foster step inside on his way to the posts scoring in his eighth consecutive match.

Back to back tries around quarter time effectively took the game away from the visitors.

Kye Siyani was the first to score taking a lovely tip on from Jamie Pye to go under the posts before Hutchings scored wide out on the right on the next set.

Nico Rizzelli, in the unfamiliar position of stand-off, and Josh Simm drove the kick off back well. On the last Paul Nash spun out of a tackle fed Dodd whose delicate grubber was touched down in the corner.

The final two tries of the half came from great high kicks from Dodd complemented by superb kick chases.

On the half hour Hutchings and Harvey McDaid combined to push the Giants catcher into touch winning a ten-metre scrum. Rizzelli ran the ball right but was stopped inches short. From the play the ball Brad Holroyd dummied his way over.

Five minutes later the kick chase pushed the Giants fullback over his own in-goal line again to win a ten-metre scrum. This time it took four tackles before Rizzelli but Lewis Baxter through sidestepping his way to the posts.

The second half started in exactly the same way as the first. Saints exerting pressure, forcing the error then scoring on the next set. Four tackles in Harvey McDaid’s show and go took him to the line. Quick thinking from Foster at the play the ball saw him flick a miss pass out to Hutchings who dove over in the corner.

The Giants should have opened their account on 47 minutes, but their big substitute prop knocked on over the line.

The Saints, however, took full advantage of the seven-tackle set waltzing down field for Rizzelli to put Simm over in the right corner.

The Saints defensive line was pierced just before the hour when the Giants hooker dummied his way over from the play the ball after courageous tackling from Dodd and Keenan McDaid had stopped a certain try from a much bigger opponent.

On the hour another seven-tackle set saw Dodd go left on the fifth before screwing his kick back right for Harvey McDaid to win the contest for the ball to score.

Holroyd brought up the half century with his second, stepping his way through a tired kick chase to go 70 metres to the posts.

The Giants gained a modicum of respectability with their second try five minutes before the end but the Saints had the last laugh as Josh Simm took advantage of a series of offloads to score at the death.

This win means that whatever happens in the next round of games the Saints will play a home semi-final at the Totally Wicked Stadium against the Leeds Rhinos on Thursday 12th September for the right to contest the Grand Final.