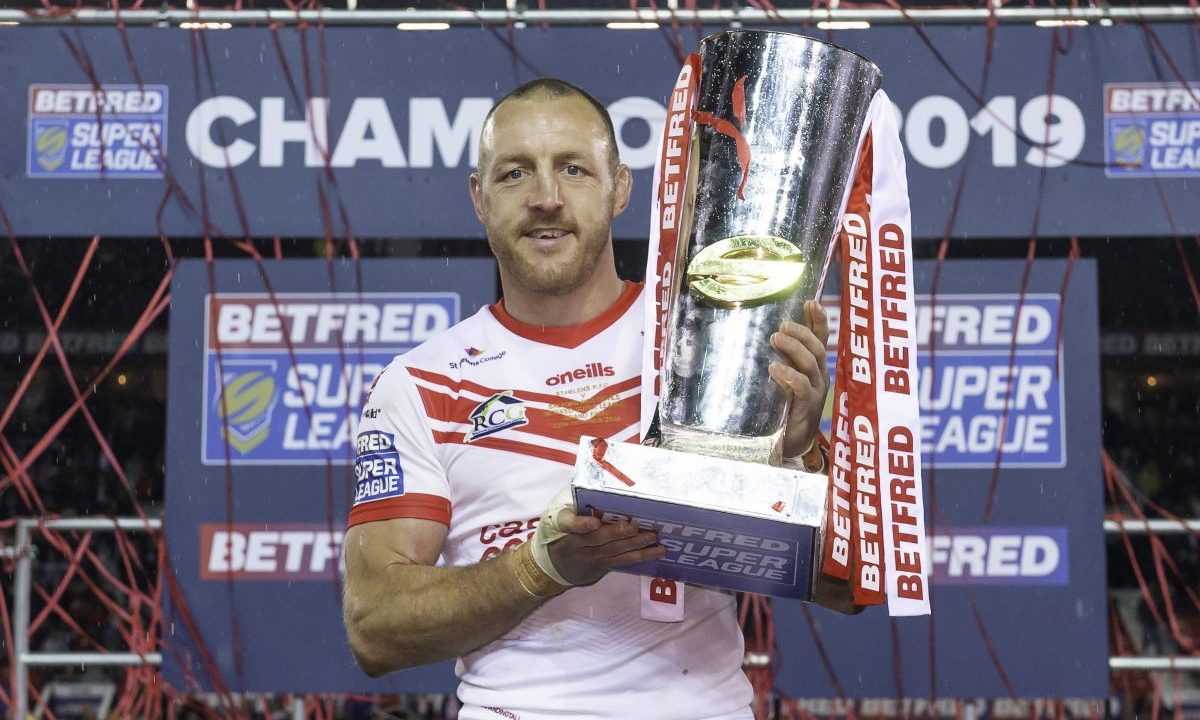 Sunday’s game against Castleford Tigers presents another milestone for one of our greatest home grown products. The legend James Roby will play his 457th game for the club, bringing up his 500th professional appearance overall.

James Roby emerged from the Saints Academy to become one of the all time great players. His diminutive stature belied his great physical strength and flexibility. When this is combined with sensational footwork and a great turn of pace then the result is a player of the highest order.

He made his Saints debut in March 2004 aged 18 against Widnes Vikings and his inexorable rise saw him represent Great Britain before his 21st birthday. James was skilfully used to work in tandem with the mesmeric Keiron Cunningham at dummy half. Typically ‘KC’ would start a match to organise and drive the pack forward and then as the opposition flagged, ‘Robes’ would emerge from the dugout to tantalise defences with his speed and guile. This hooker combination provided the platform for many Saints victories.

The 2007 season saw Robes named Man of Steel. His statistics from that year provide chilling reading for opposition teams. He was the top man for forward progression notching up over 3300 metres over the season. James was also high in the charts of tacklers, making an average of 26 tackles per match. He also made an impressive 80 busts and offloaded to colleagues 43 times. Amazing indicators, but when you consider that he was only on the pitch for half the match then the mind boggles. That season also saw James become the first try scorer at the new Wembley Stadium as he stepped, broke tackles and powered his way over the Catalans try-line beating five defenders in the process.

The 2008 season saw an acceleration in his try-scoring exploits as he notched an impressive 15 tries over the season. By the end of the 2009 James was closing in on 50 tries for the club. This haul included braces against Wigan, Wakefield, London Skolars, Harlequins and Leeds. Needless to say he still continued to display plenty of steel in his magnificent defence.

The 2009 and 2010 seasons proved to be a roller coaster seasons for the Saints. The ride however, ultimately ended in disappointment, despite a 2010 Challenge Cup Semi Final and a fifth successive Grand Final. James continued with the same boundless energy.

Never the less the players responded magnificently by reaching an 11th consecutive Challenge Cup Semi Final and a record breaking sixth successive Grand Final. However, a sour taste of disappointment featured as the Saints lost to Wigan in the Challenge Cup and Leeds came back strongly in the last twenty minutes of the Grand Final to dampen the spirits. The season was marked as arguably the best ever for Roby in the red vee.

With Cunningham calling time on his career, Roby began to start at hooker and invariably full 80 minutes followed. His statistics with this amount of game time were something from science fiction as he topped the charts in several aspects of the game. He was shortlisted for Man of Steel and only narrowly missed out on his 2007 accolade. Again he was the automatic choice as England hooker for the Four nations Tournamant at the end of the season.

His 2013 season was disrupted by injury. By this time he had established himself as the most valuable player at the club and his absence was a great blow to the Saints chances of winning silverware. He had recovered by the end of the season to help Saints progress to the Grand Final, but to no avail. His fitness ensured his automatic selection for England in the 2013 World Cup.

2014 saw James complete another stupendous campaign with the added bonus of a Grand Final win over Wigan and an extension to his impressive collection of honours. Over the next few seasons James continued to demonstrate that he was the most consistent high performing player in the competition. His selfless efforts were rewarded in 2018 when he was appointed team captain. That season proved to be a sensational one for the club when the side produced some scintillating rugby to capture the League Leaders Shield.

Roby, now 34, was quite simply outstanding, against the Rhinos last week. The way he set the tempo was outstanding. James is the ultimate chef d’orchestre, with his crisp passing and dynamic runs from dummy half.

Clearly age is just a number as Roby hits that magical 500 mark. A true legend of the game and truly one of our own.

Thanks to Saints Heritage Society for the words.