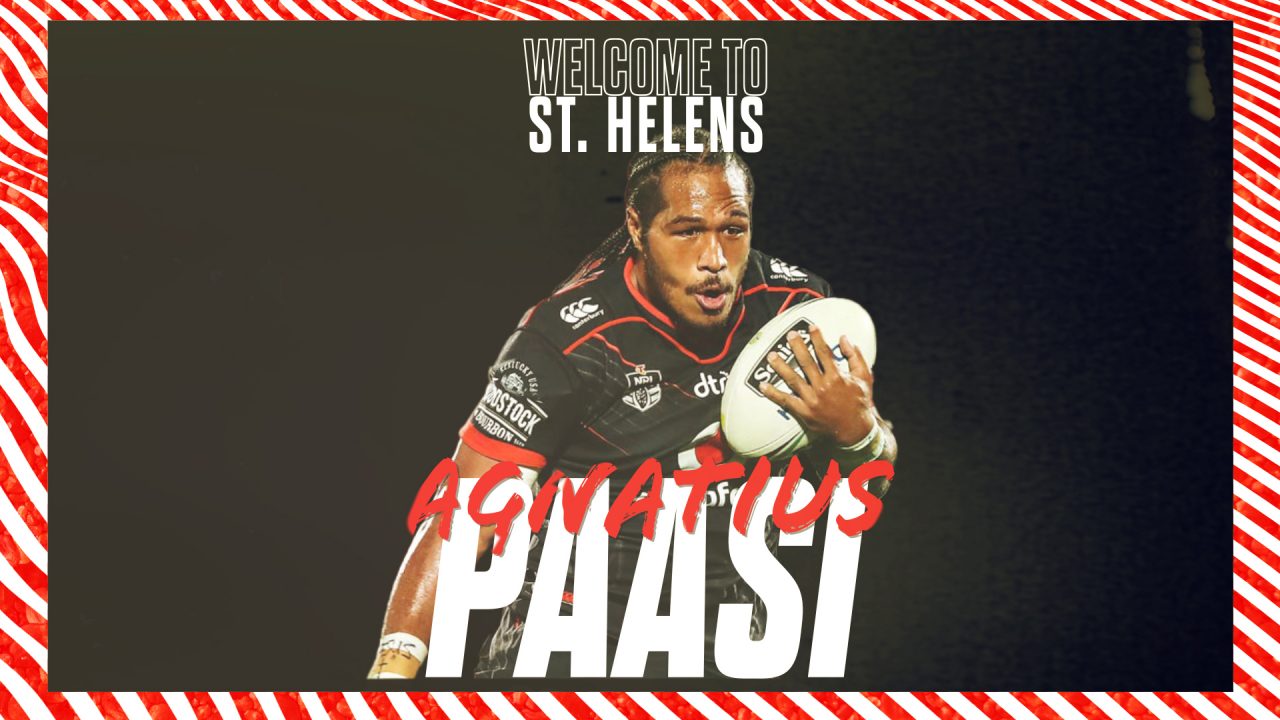 Following confirmation of his visa, St.Helens R.F.C. can now confirm Agnatius Paasi will join the Club in 2021 after signing a two-year deal, with the option for a third.

The Tongan born prop has signed from the Vodaphone [New Zealand] Warriors where he was one of their stand-out players in 2019, being a regular starting prop, averaging over 100 metres and 28 tackles a game.

The 28-year-old, who only signed a 3 year deal with the Warriors in 2019, was hampered by an early season ankle injury playing six times and scoring twice in 2020 and has now opted for a new challenge with the Super League Champions in 2021.

Paasi, nicknamed ‘IGGY’, weighs in at nearly 114kg [18 stone] and will offer our some explosive pace and power in our forward pack next season.

🇹🇴 Did someone say Tonga are in St Helens next year for @RLWC2021? 🤔

One Tongan has already booked his flight early… ✈️ 😏

On signing for the Saints, Paasi said: “I am delighted to have signed with St Helens and my family and I cannot wait to come over and start our new life in England.

“I know Kristian Woolf after playing for Tonga under him and he was a big reason why I opted to join the Saints. I want to prove myself to him and the fans, train hard and play my best.

“St.Helens is a great Club with a history of success and hopefully I can come over play my heart out and continue that success.”

Head Coach Kristian Woolf said: “Iggy is a great ball carrier. He is as good a ball carrier I have seen in the NRL and has a similar influence with the ball in hand.

“On top of that, he has a terrific skill set and offload ability along with a pre-line pass ability. He is the type of player that can turn the momentum of a game in your favour and he is a big defensive player too. All of which I feel will really add to our team.

“I have coached him for Tonga and I remember we played against PNG in the most arduous conditions I have ever been involved in. It was a tough, tight game where you need to stand up and be counted and he was one of the ones who really stood out.

“We are looking forward to having him with us ahead of the 2021 season.”

A 2011 NYC premiership winner with the Junior Warriors, he made his NRL debut in 2014. He then joined the Gold Coast Titans making 54 appearances between 2015-2017 before re-joining the Warriors in 2018.

That year saw Paasi lead the Warriors to their first NRL finals for seven years, starting in 23 of the club’s 25 matches. By the end of the season, Paasi had also won selection in the Kiwis’ 24-man squad for the one-off Test against Australia and the three-match series in England.

He has been almost ever-present for the Vodafone Warriors in 2019, missing just one match in a campaign in which he made his 100th NRL career appearance. In total Paasi made 107 appearances, scoring 14 tries in the NRL and was capped by Tonga in 2014.

Like our latest signing, Joel Thompson, off the field ‘Iggy’ is heavily involved in community activities which earnt him a nomination as the Warriors representative for the Ken Stephen Medal. In August he had his hair – which he had been growing for four years – cut off in support of the Shave for a Cure cancer charity.

Paasi is a father to four children he and his family will join the Club ahead of the start of the 2021 Super League campaign.