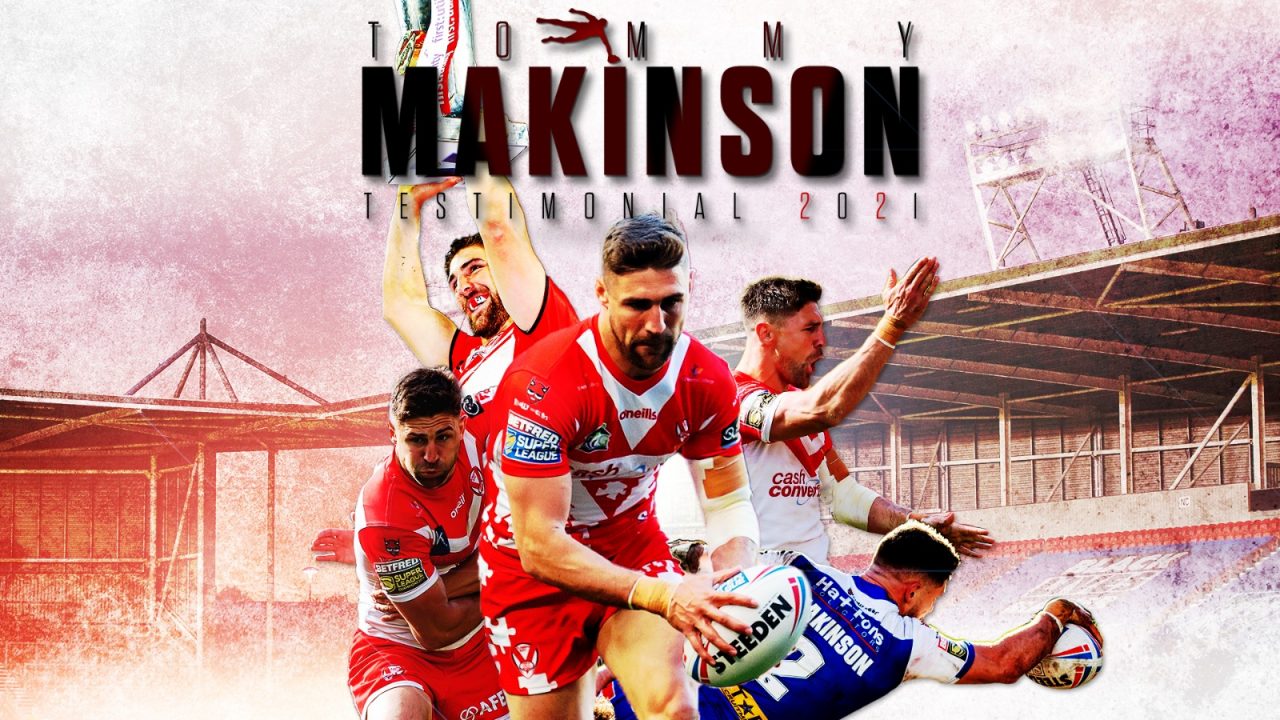 St.Helens R.F.C. is delighted to announce that Tommy Makinson has been awarded a Testimonial year in 2021 as he heads into his 10th season in the Red Vee.

Makinson who started his Saints journey in the Academy back in 2008 climbed through the ranks to make his first team debut in 2011 against Salford and has not looked back since.

He scored 11 tries in his debut season and was given the right wing berth for the 2011 Grand Final against Leeds Rhinos.

The 2012 and 2013 season witnessed Tommy gain a regular staring place on the wing. He scored some magnificent tries and was particularly adept at acrobatic finishes. He also proved to be a reliable goalkicker as well and his high level performances saw him drafted into the the England Knights team in 2013.

His try scoring feats in 2014 resulted in 29 tries and some of the best touchdowns ever seen in a Saints jersey. His midfield take from a Paul Wellens kick in the 2014 Grand Final was the move that sealed the match for the Saints. Once again we were Super League Champions.

Over the next three seasons Tommy honed his skills and gained a well-earned reputation as a superb finished with several stupendous tries and he joined very distinguished company in passing the landmark of 100 tries and goals for the Saints.

The 2018 campaign proved to be a golden affair in the career of Tommy Makinson, particularly on the international front. He scored a sensational try for England in the victory over New Zealand in Denver, Colorado. The end of season test matches against New Zealand saw Tommy voted as the man of the series after scoring a hat trick in the second test at Anfield. Moreover, these performances earned Tommy the Golden Boot award as the International Player of the Year for 2018.

The 2019 campaign once again proved to be a success for Tommy, highlighted by his second Grand final success with his club – including kicking the final points via a wonderful drop goal. Tommy finished the 2019 as the top try scorer in Super League. He won his third Super League title last week and once again played a crucial part in the win as his drop goal attempt re-bounded off the sticks before Jack Welsby grabbed the headlines.

On being awarded his Testimonial, Makinson said: “I’m delighted to have been awarded a testimonial year at the Saints. I’ve been at this club since I was a kid and I love playing here. Winning our back to back grand final on Friday was something I willl never forget and I can’t wait for next year now.” Mike Rush, Chief Executive at St.Helens said: “Tommy has been a great servant for this club and he thoroughly deserves his Testimonial year.

“Both on and off the pitch Tommy is the ultimate professional and has been a hugely important player for the club over a number of years. He is one of the best wingers in the world and you can see why he is such an inspirational role model for young and upcoming rugby league wingers.

“He was again crucial in our success most recently in the Grand Final and I urge all fans to pay their thanks to him and get behind Tommy and his Testimonial events in 2021.”

Makinson will have a Testimonial match in the new year and this along with the charities he has chosen to support will be announced in due course.