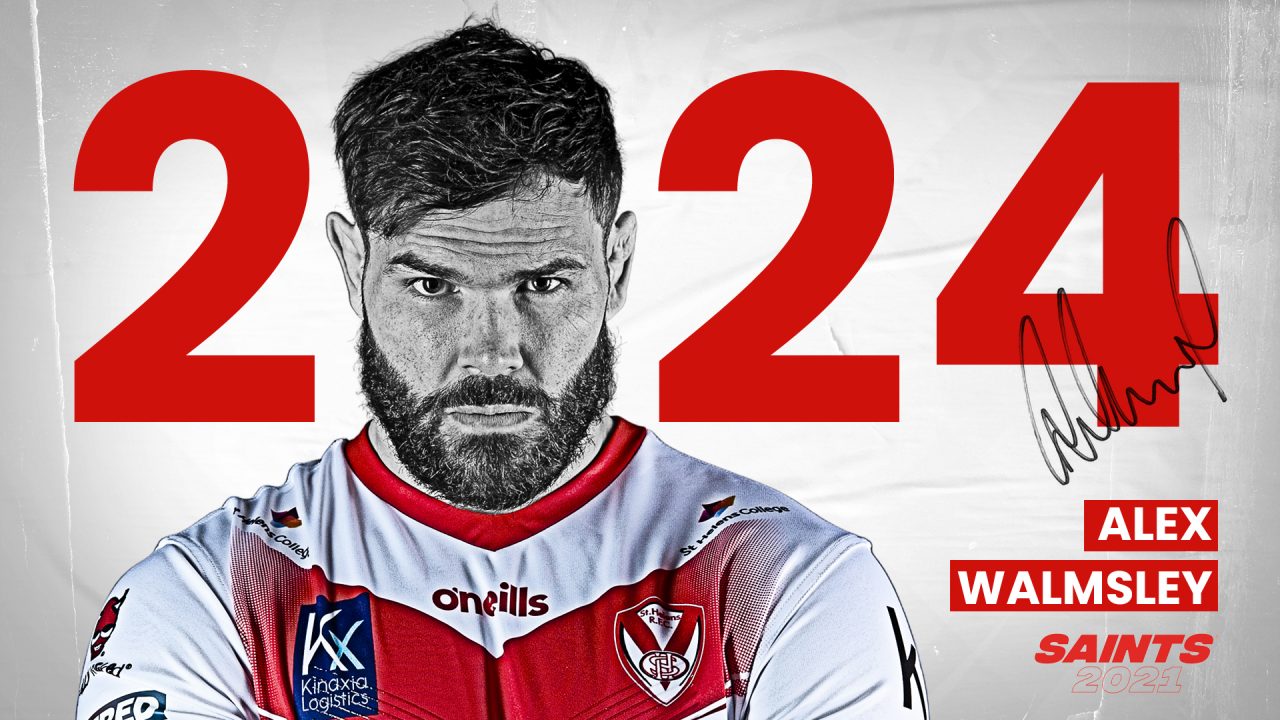 St.Helens R.F.C. is delighted to announce that Alex Walmsley has signed a new long term contract extension which will keep him at the Club until at least the end of the 2024 Betfred Super League season.

Signed initially on a three-year contract back in 2012, he made his debut at home against Hull FC and went on to make 26 appearances for the club.

An uncut diamond, his go forward had people talking about early international honours and he continued his progression in 2014 helping Saints win the Super League Grand Final. In 2015 he went up another level, making more than 4000 metres – and he signed a new deal with the club.

He was stellar in 2016 and that continued in 2017 with England international honours.

Alex signed a new four-year contract in 2018 but sadly he suffered a neck fracture at Warrington, just five games in, and missed the full season.

2019 saw Alex fight back and was a stand-out performer, leading from the front as Saints went all the way to lifting that famous Super League trophy at Old Trafford yet again. He was also rewarded by representing Great Britain on their first tour since 2013.

Last season was arguably Alex’s best in a Saints shirt. He powered his way into the Super League Dream team after an impressive 10 tries in 20 appearances and was often the key to our success in 2020.

In total Walmlsey has made 201 appearances for the Saints and his strong form has been rewarded with a long-term contract extension.

On signing his new deal, Walmsley, 30, said: “I am really happy and I am delighted to get the deal done and commit my future to the Club. I have been here since 2012 and made my debut in the 2013 season and I have loved it.

“The Club and the fans and the town have been so good to me and it is my new home. I have loved playing for St Helens and the whole Club. It was so easy to commit my future to them and hopefully I can end my career here.

“My current deal takes me until the end of 2024 but I still feel I have a lot of rugby left in me and this is the place I want to finish my career. The plan is to have a successful next few years and hopefully leave an impact on the Club in what will hopefully be 12 years of service. I am excited to be a part of what I am sure will be a successful few years for this Club.”

Chairman Eamonn McManus commented: “It’s a huge boost both to St Helens and to Super League that Al has extended his contract to the end of 2024.

“He’s established himself as a potent force in our squad, and for England, and has been key to our success in recent years. It is great that he’s now committed to us effectively for the rest of his career.

“Both his playing and leadership attributes are of equal importance to us and there’s no doubt that he’ll be a major and world class contributor to the performance of both club and country in the years ahead.

“It’s great news indeed to start the season with.”

Head Coach Kristian Woolf added: “This is terrific news for the Club. He has been a real leader in terms of our pack well before I arrived here, but was certainly that leader for us last season. I am looking forward to him being that for us this season too.

“He is a big part of our success and is a real leader within our group and particularly a leader of our pack and I think it is a real sign of what he means to this Club, but what the Club means to him as well in terms of him being willing to put pen to paper and extend his stay with us.

“There has been no inclination of him looking elsewhere or at other opportunities and he is St Helens through and through. This is where he wants to be and he is going to really leave his mark on this Club throughout the course of his contract.”

Walmsley is expected to be in action as Saints face Hull KR on Thursday (8.15pm).