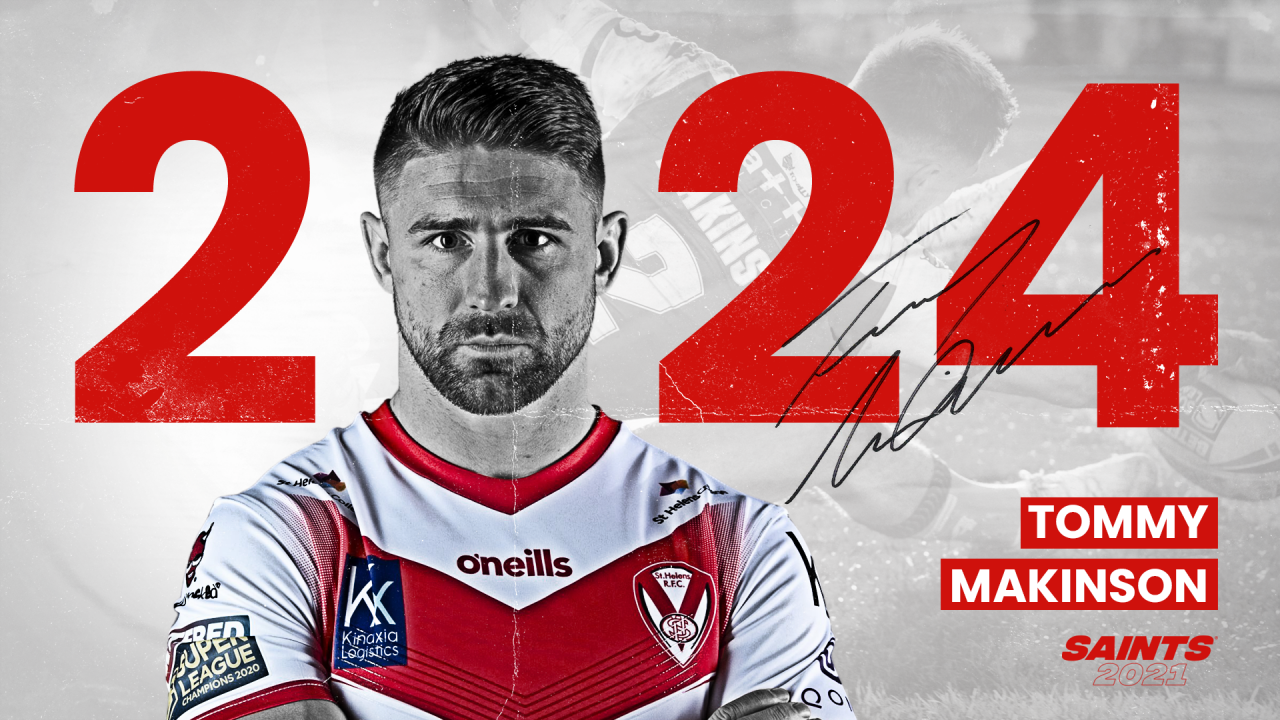 St.Helens R.F.C. is delighted to announce that England international winger Tommy Makinson has extended his current contract by a further two years until at least the end of the 2024 Betfred Super League season.

Makinson, sponsored by Beaufort Financial, has been a one Club man since emerging through the Saints Academy and making his debut in 2011. The winger has gone on to win three Grand Final winners rings as well as being named the Golden Boot winner back in 2018 and top try scorer and metre maker in 2019.

He backed up his 2019 Grand Final winning drop-goal in 2020 as he played another match-winning role as his drop-goal attempt led to Jack Welsby’s last minute winner.

Makinson has made over 250 appearances for the Saints, scoring an incredible 141 tries and is into his Testimonial season at the Club.

On signing his new deal, Makinson, 29, said: “When the club presented that contract in front of me, I was really excited to sign it and become a one club man. I didn’t see myself playing for anyone else as Saints is where I wanted to be and I am really excited for the season ahead.

“I have been here over 10 years now and hopefully for a long time yet. Pulling on that shirt, with the St Helens fans behind me, is the main reason I love playing for this club.


“I now want to repay that faith shown in me and help bring trophies back to this great Club. I have been lucky enough to win a few, but hopefully over the next few years we can win even more.”

Chairman Eamonn McManus commented: “Tommy has been a lynchpin to the success of the Saints in recent years and continues to be the best all round winger in Super League.

“It’s tremendous news that he’s effectively committed himself to us for the rest of his career during his testimonial year with the club. I’ve no doubt that yet more deserved success lies ahead for him with the Saints and at international level.”

Head Coach Kristian Woolf added: “This is great news for the Club. Tommy is a great character and of course a top player. He brings a great energy to the group and we can all see what a try scorer he is with the spectacular finishes everyone notices.

“But what we love is his hard work, the number of carries he is willing to take and the energy he brings around both training and into games. He is a real good bloke to have involved and we are all delighted he has committed himself to us for the foreseeable future.”

Makinson who started his Saints journey in the Academy back in 2008 climbed through the ranks to make his first team debut in 2011 against Salford and has not looked back since.

He scored 11 tries in his debut season and was given the right wing berth for the 2011 Grand Final against Leeds Rhinos.

The 2012 and 2013 season witnessed Tommy gain a regular staring place on the wing. He scored some magnificent tries and was particularly adept at acrobatic finishes. He also proved to be a reliable goalkicker as well and his high level performances saw him drafted into the the England Knights team in 2013.

His try scoring feats in 2014 resulted in 29 tries and some of the best touchdowns ever seen in a Saints jersey. His midfield take from a Paul Wellens kick in the 2014 Grand Final was the move that sealed the match for the Saints. Once again we were Super League Champions.

Over the next three seasons Tommy honed his skills and gained a well-earned reputation as a superb finished with several stupendous tries and he joined very distinguished company in passing the landmark of 100 tries for the Saints.

The 2018 campaign proved to be a golden affair in the career of Tommy Makinson, particularly on the international front. He scored a sensational try for England in the victory over New Zealand in Denver, Colorado. The end of season test matches against New Zealand saw Tommy voted as the man of the series after scoring a hat trick in the second test at Anfield. Moreover, these performances earned Tommy the Golden Boot award as the International Player of the Year for 2018.

The 2019 campaign once again proved to be a success for Tommy, highlighted by his second Grand final success with his club – including kicking the final points via a wonderful drop goal. Tommy finished the 2019 as the top try scorer in Super League. He won his third Super League title in 2020 and once again played a crucial part in the win as his drop goal attempt re-bounded off the sticks before Jack Welsby grabbed the headlines.