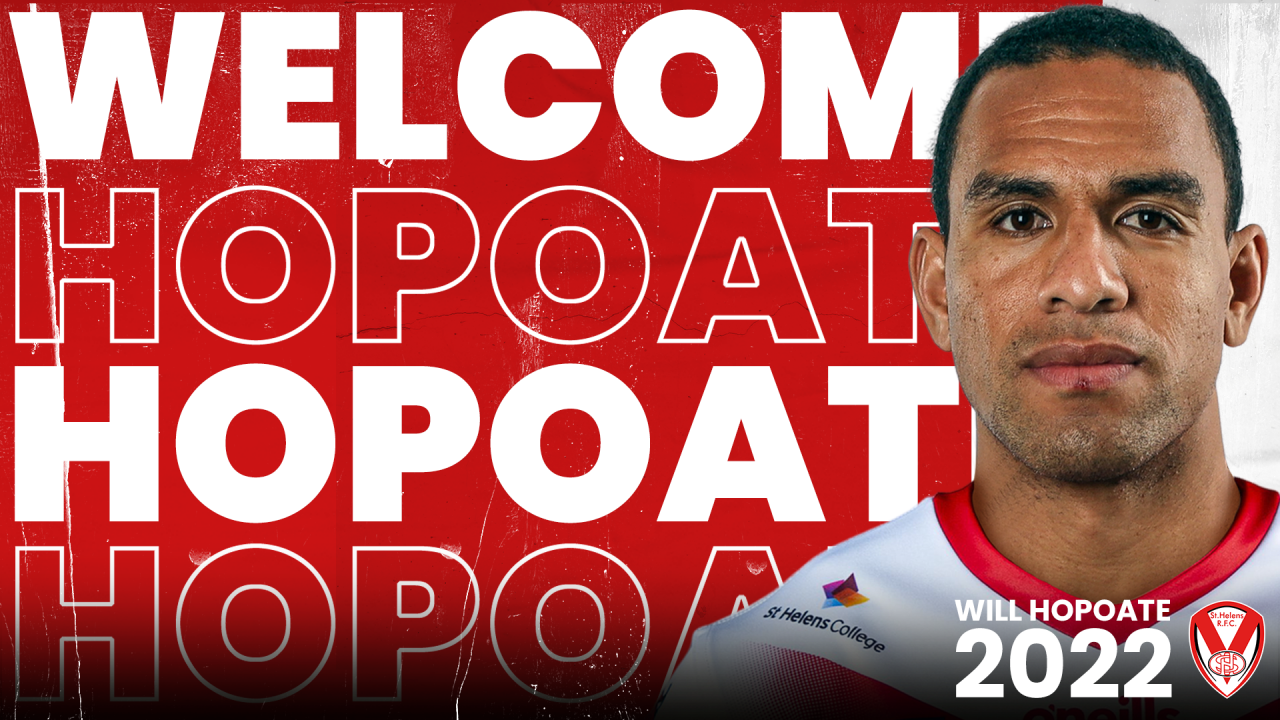 St.Helens R.F.C. is delighted to confirm the capture of 29-year-old Tongan International Will Hopoate on a two year deal from 2022 – with the option for a third year to be triggered.

The centre, who can also play at full back, has signed from Canterbury Bulldogs where he has played 120 first grade games, scoring 24 times.

Hopoate has been selected to play State of Origin for New South Wales on five occasions including in 2011, as he became the second youngest player behind Brad Fittler to play for NSW, scoring a try on debut.

In 2017 and 2018 Hopoate captained Tonga, playing every game of their stunning charge to the 2017 Rugby League World Cup semi-finals, including scoring a try in their famous win over New Zealand.

He also grabbed the first score of the game in Tonga’s historic 16-12 victory over Australia in 2019, before again impressing in Tonga’s win over Great Britain. Hopoate has made a total of 11 appearances for Tonga – coached by Saints boss Kristian Woolf.

We’re delighted to confirm the capture of Tongan International 𝐖𝐢𝐥𝐥 𝐇𝐨𝐩𝐨𝐚𝐭𝐞 from @NRL_Bulldogs on a two year deal from 2022 – with the option for a third.

On signing for the Saints, Hopoate said: “I am very happy and excited to be making the move to St Helens and to play for such a proud and historic club. I have never been to the UK before and I am excited to be a part of it all.

“I had option to sign for Club’s in the NRL, but I have always wanted to play in the Super League and a strong Club like St Helens meant I just couldn’t turn it down.

“I have been coached by ‘Woolfie’ before for Tonga and that was a big reason why I made the decision. I know him as a person and as a coach and his values and standards that he sets is something I want to buy in to.

“The recent success the Saints have had and the history of the Club over the years shows it is a big and powerful club and I am just grateful that they showed in interest in me and I am just happy to be a part of it next year.”

Head Coach Kristian Woolf added: “Will is a guy I know extremely well. He has played for Tonga since 2016 and captained Tonga in the past too which shows what a strong character he is.

“If I go back to 2019 and Tonga played against Great Britain and Australia and he was one of our best players against two top quality teams on the world stage which gives you an idea of the quality we are getting.

“He has the ability to play in the centres, but he has versatility too. He has made a name for himself at full back and so will be a great support to Jack Welsby. He has also played at 6 for Tonga as well so that versatility and quality is going to be invaluable for us.

“From a personal point of view, he is not just a good player, but is a great bloke and will fit into the community and Club really well.”

Previously to joining the Bulldogs, Hopoate played 22 times for his hometown club Manly Sea Eagles before moving on to play 38 times for the Parramatta Eels. In total he has made 180 NRL appearances, scoring 45 tries.

Hopoate will join us ahead of the 2022 season and will arrive with his wife and four young children.