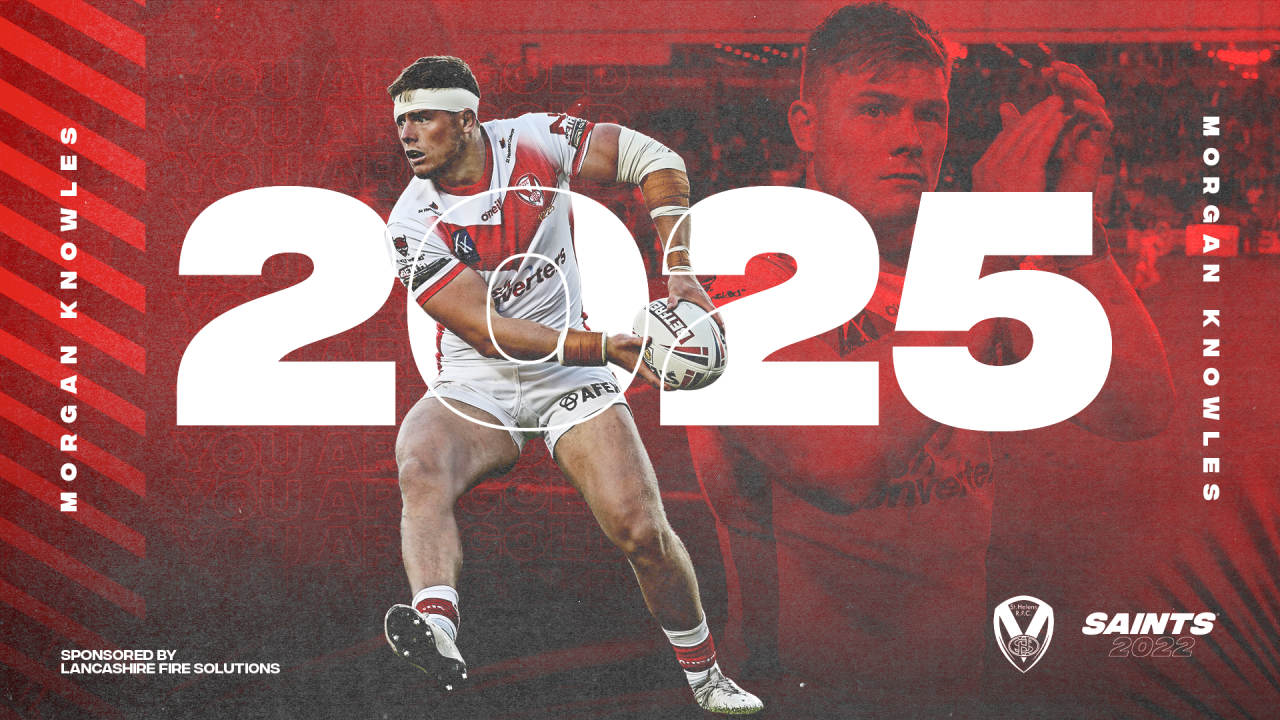 St.Helens R.F.C. is thrilled to announce that England forward Morgan Knowles has signed a new four year contract which will keep him at the Club until at least the end of the 2025 Betfred Super League season.

A graduate of the prestigious Saints Academy, Knowles joined from Barrow Island after impressing with his commitment as a 16-year-old, travelling down from Cumbria for Scholarship training.

His progress continued and he made his debut for Saints and Wales back in 2015 before his real breakthrough came a year later, making 24 appearances in the Red Vee.

📅 We have an early Christmas present for all Saints fans behind door 1️⃣3️⃣ of our digital advent calendar! 👀

He can play at loose forward and hooker, as well as in the back row – and that versatility saw him appear 30 times for Saints in 2017 and three times for Wales in the Rugby League World Cup.

2019 saw Knowles named in the Super League Dream Team after a stellar season in the Red Vee which resulted in him crossing for a crucial try in our Grand Final victory over Salford.

Knowles, looked even better in 2020 as his energy and power in the forwards played a crucial part in Saints’ back to back Grand Final success. His performances earnt him the Saints Player of the Year Award and he was also named in the Super League Dream Team for the second successive season.

Last season saw Morgan make 17 appearances and was again named in the Super League Dream team for the third straight season. He then switched his international alliance to England in 2020, making a try scoring debut for Shaun Wane’s men.

In total Knowles has made 149 appearances for the Saints and his strong form has been rewarded with a long-term contract extension.

Is there a better Christmas present than that? 🎁#COYS | #MondayMotivation pic.twitter.com/icV6Ez0wpC

On signing his new deal, Knowles, 25, said: “I am really made up. I’ve really enjoyed my time here, the Club has been brilliant with me as have all the players and the staff. I am happy here and you can’t really put a price on that. So I am delighted to extend my stay.

“I feel really lucky and privileged to be a part of this team and this group and I want more success moving forward.”

Chairman Eamonn McManus commented: “It is tremendous news for St.Helens, Super League, England and Great Britain that Morgan has committed to a long term contract with the Club.

“He is already the best loose forward in Super League and has three Grand Finals and one Challenge Cup win to his credit. But he has his best years, of which there will be many, yet to come.

“Besides his immense contribution to us as a leading player in a pivotal position, he is also going to be a crucial to help lead the evolution of the next generation St Helens team, which aims to continue our success and to uphold our values and history.

“A great Christmas present to all and a great boost to our hopes and ambitions in 2022 and beyond.”

Head Coach Kristian Woolf added: “Morgan is an exceptional signing for the Club. He is a real stand-out player for us in the way he performs and competes every week. He has a unique skill-set where he can play with the footy, but also has that ruthless and tough competitive style.

“If you ask through our playing squad and the majority of players in the competition, he would be someone who they mention and respect. He is a real key player and figure for our team and is a real leader and leads by example both on and off the field.”

Knowles is currently working hard on his fitness following an ankle injury picked up playing for England against France.