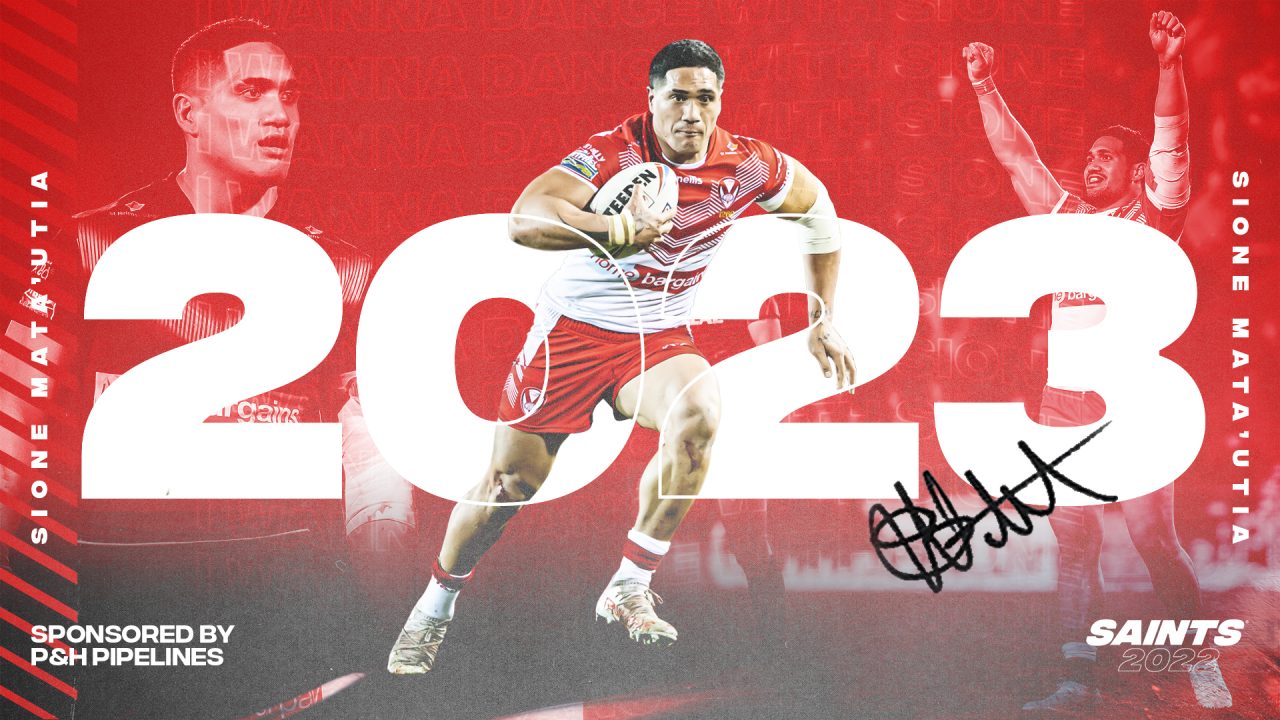 St Helens R.F.C. has triggered Sione Mata’utia’s 12-month contract extension meaning he will stay at the Club until at least the end of the 2023 season.

Mata’utia originally signed a two-year deal, with the option of a third, after his release from Newcastle Knights in 2020 and the powerful backrower has extended his stay into a third season after the Club opted to take up the further year.

The 25-year-old backrower had an impressive maiden season with the Saints, scoring five times in 22 appearances. He missed out on the Challenge Cup Final victory at Wembley due to suspension, but played a key role in the Grand Final victory at Old Trafford.

Mata’utia has pulled on the Red Vee a total of 31 times, scoring 8 tries.

✍️ St Helens R.F.C. has triggered Sione Mata’utia’s 12-month contract extension meaning he will stay at the Club until at least the end of the 2023 season!

On extending his deal with Saints for a further year at least, Mata’utia said: “I am glad to get the extra 12 months agreed and I am looking forward to the year ahead.

“When we get there [to further contract negotiations] I would love to stay for longer, but obviously I do also have to think about my partner and my kids who are away from home. We will see how it goes and there is a lot of time before we have to look at that.

“It took me 12 months or so to fit into the group and figure out where I could add some value and take my game to the next level, but I feel like I have started the year well and although things didn’t go my way with injuries, I am excited about the rest of the year and next season!”

Sione made his NRL debut for the Knights in 2014 and later that year became the youngest player to ever represent Australia, at just 18 years of age and 129 days – eclipsing Israel Folau’s record by 65 days. He went on to play three tests for the Kangaroos and another for Samoa. Sione has also represented the NRL All Stars.

Mata’utia, who is the younger brother of Castleford Tigers’ Peter, captained the Knights at just 20 years of age old, on his way to amassing a total of 124 NRL appearances, scoring 31 tries.

The powerful Australian, who can play in a number of positions, including second row, loose forward and centre, played seven seasons with the Knights and helped them reach the finals in 2020.

Head Coach Kristian Woolf said: “The fact Sione has chosen to take up the extension with us is a great sign for this Club and this team in terms of the direction we are going in.

“I worked with him at Newcastle Knights so I know the character and player he is. He has proven that again and he was the best back rower in the comp in the early rounds here this season. Through injuries he has had to play in the centres and has shown his versatility which is another reason we signed him.

“He is a great person around the group and a good fit for us going forward and I am looking forward to seeing him continue to improve.”

Mata’utia follows the re-signings of Matty Lees and Jack Welsby as the Club looks to retain our strong squad into 2023.