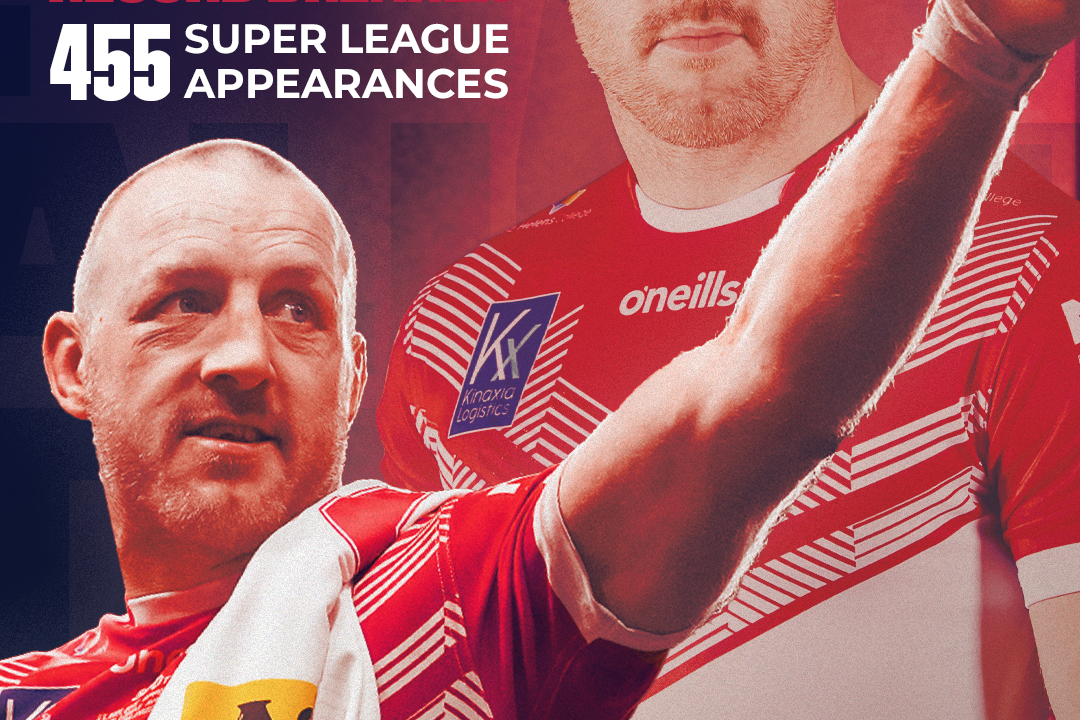 James Roby moved top of the all-time Super League appearance charts on Sunday, June 12 when he faced Hull KR in the Betfred Super League game at the Totally Wicked Stadium.

Legend x Legend 🤝 @PScully13 was on hand to present our Captain with his record breaking shirt! 🙌#COYS | @SuperLeague pic.twitter.com/OL5TG8Naqg

His 455 Super League appearance, all of which have been made for his one club St Helens, moves him one ahead of seven-time Grand Final winner Kevin Sinfield OBE. Sinfield led the tributes to St Helens’ 36-year-old hooker after he surpassed his record.

Chairman Eamonn McManus has paid tribute to our Captain: “I never tire of providing tributes to James Roby. Reaching this utterly incredible milestone neatly encapsulates them all.

“He represents all that is great about our sport and is its perfect role model. He is also one of its greatest ever players. His impact on our club and our sport is incalculable. Sometimes I think he could play forever. Incredibly, his powers show no signs of diminishing.

“It’s been an absolute privilege to have been the Chairman of St Helens throughout James’ career. He has made my job much easier and more pleasurable than it otherwise would have been, thank you indeed James Roby.”

A guard of honour for a legend of the game.

Kevin Sinfield, who held the record previously said: “Where do you start? He is a wonderful human being and one of Super League’s best ever, just what a player.

“He has been the same bloke the whole way through and I am absolutely delighted for him. He is just Mr Consistent and he just delivers and keeps delivering and I don’t think I have ever seen him at less than a nine out of 10 game.

“You always just knew that you had to be on it at every single play with Robes. I don’t know whether there will be another one, he is a special guy.

“People will think I am disappointed but I am not. Records are there to be broken and there is no one better. If there is someone who is going to beat it he would be number one.

“He is just a great guy and when you have got someone leading your group who is so well respected, who just delivers every single week, is just consistent and plays at nine or ten out of ten every week guys turn up for you and they have continued to do that.

“Never mind letting your team down, he will always be at the forefront, flying the flag for his team and long may that continue for him because he deserves everything he gets.”

Super League chairman, Ken Davy said: “Congratulations to James Roby on reaching 455 and becoming the top Super League appearance maker. He has been incredible throughout his long career.

“To be a one club man in any sport speaks volumes, it not only shows the clubs commitment but also the individual’s ability to consistently produce outstanding performances. To have a match average for over 100 metres gained and 32 tackles given he started his career mainly as a replacement is phenomenal.

“The number of people that have talked about him being such a humble person is testament to the man.”

Former Coach Justin Holbrook, who made James Roby Captain, has paid tribute to him ahead of Sunday's huge @superleague milestone… 🙌

Roby has played his entire 18-year career for St Helens who he signed for at the age of 16.

A tribute to James Roby’s career will be broadcast on the Super League YouTube channel (www.youtube.com/SLHighlights) on Sunday June 12 at 17:30 and also broadcast on Sky Sports on Thursday June 23 at 22:15.

"When you're James Roby you can do that" 🏆

Hear from James Graham on what makes James Roby special before he can take the field for his 455th #SuperLeague match this afternoon 🙌 pic.twitter.com/qKfdAEtWfO