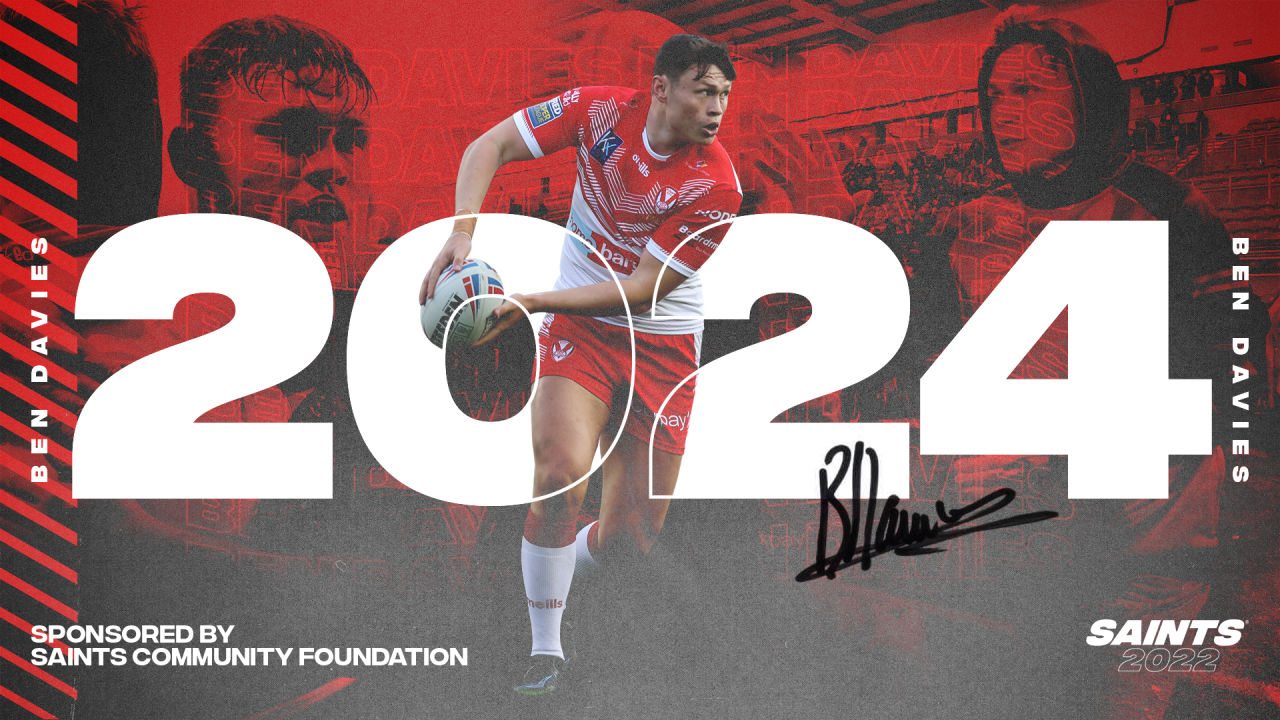 Versatile centre Ben Davies has signed a two-year contract extension at the Saints which will see him stay with us until at least the end of the 2024 season.

Ben, 22, is predominantly a centre or second rower from Widnes, but has proven to be hugely versatile having also played in the halves in recent weeks.

He played his community rugby for Halton Farnworth Hornets before switching to Widnes Moorfield. From there he signed a scholarship deal at Widnes Vikings, playing in their Academy and making his first team debut in 2019.

Ben, who also spent time on loan at Salford, represented Lancashire in the Academy origin programme and was part of the England Under 18’s Academy squad before signing for the Saints – initially with the Reserves.

He made his Saints debut in defeat to Salford in 2020, impressing with a solid display at centre. Davies made another single appearance in 2021, again against Salford and was handed the number 22 jersey for 2022.

So far this season he has played 7 times, scoring two tries and on extending his deal with Saints, Davies said: “I am grateful for the opportunity and I am excited for what is ahead.

“I want to thank all the coaches from Saints of course, but from my amateur days and at Widnes too as well as my family and friends.

“My aim was to always play Super League and I enjoyed my time at Widnes which was an exciting time, but this is my club and who I want to play for now.

“I feel this is the best place for me to benefit, improve my game and I am looking forward to the future.”

Head Coach Kristian Woolf added: “It’s a real reward for a guy that joined us initially in our Reserves team and really impressed us.

“He is a player that understands the game, has a real skill set, is a big body, can kick and can read the game really well.

“He has worked on his physical condition over the last few months and has made a lot of sacrifices and put himself in a position to play some games for us and he has impressed along the way.

“I am really proud of how he has developed his game and his fitness and how hard he has worked. He is very versatile, and the players enjoy having him around and for those reasons he is a great signing for us.”

Davies follows the re-signings of Konrad Hurrell, Sione Mata’utia, Matty Lees, Jack Welsby and Lewis Dodd as the Club looks to retain our strong squad into 2023.