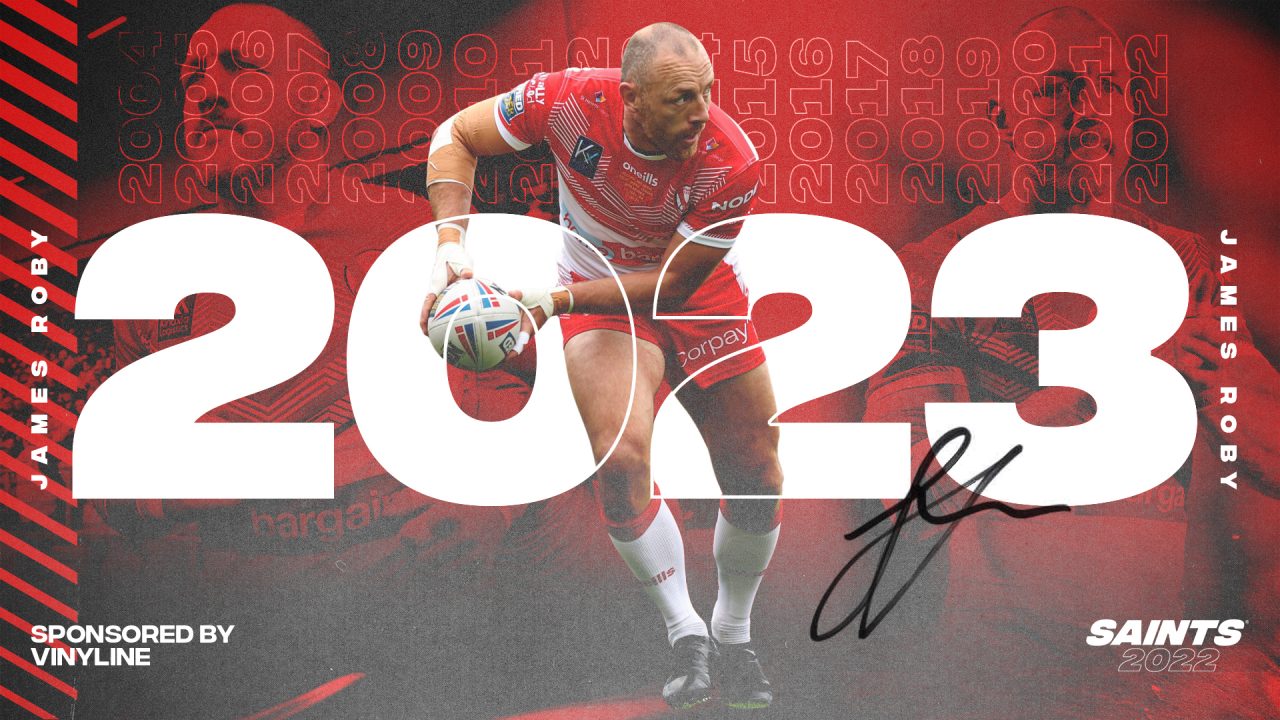 St.Helens R.F.C. is delighted to now confirm that Captain and Rugby League legend James Roby has agreed a one-year-contract extension meaning he will head into a record breaking 20th season in 2023.

The legendary number 9, who will turn 37 in November, recently surpassed 500 games for Saints before breaking the all-time Super League appearance record held by another great, Kevin Sinfield soon after.

Roby has been a one Club man since making his debut against Widnes in 2004, playing an incredible 518 times for his hometown team, scoring 116 tries.

In total he has won five Super League Grand Final rings, four Challenge Cups and a World Club Challenge. He was also named Man of Steel in 2007 and has been named in the Super League Dream team on six occasions.

On signing on for another season, Roby, said: “I was aware that last year I said this was going to be my last and I was fully preparing for that. The more the season has gone on, I was thinking otherwise and I have thought about all the pro’s and con’s and I have had a lot of conversations with my family and my wife and we have got to the point where I am feeling good and confident with my decision.

“It is a great opportunity for me to stay involved, not only this successful team, but in this organisation and the opportunity to be a Rugby League player for another year.

“If I didn’t feel it was right, I wouldn’t have signed as I have too much respect for this Club. I am really looking forward to it and immediately after I made the decision, I got that fire back in my belly and I thought ‘we can do this’. I am really grateful and really thankful for the opportunity, and I am now looking forward to one more year in the Red Vee.”

Chairman Eamonn McManus commented: “It’s difficult to add anything new about James as he continues to amaze us all.

“It was always going to be his decision alone whether to retire or continue: we are just extremely happy that it’s the latter.

“There’s pretty much no records for him to break now except his own. We are simply privileged to continue to witness the great man perform at the very highest of levels.”

Head Coach Kristian Woolf added: “This is the biggest re-signing the Club has made this year. We have all seen the level of footy he has been playing. He can still play long minutes every week and still has a real impact on the game with his skill set, his defence and of course his leadership.

“You only need to look at what he has done so far at the Club and what he is doing on the field at the moment, his consistency, his leadership and the example he sets for everyone. This Club is in the mould of him as a leader and we base our game around how he plays. His effort areas and the consistency of his effort is how we play here at Saints, and we are all delighted he will be with the Club again next season.”

Roby will captain the side in tonight’s derby clash against Wigan Warriors at the DW Stadium live on Sky Sports (kick off 8pm).

✍️ Was it ever in doubt? 🐐#COYS pic.twitter.com/kjtq6qs3AF

James Roby emerged from the Saints Academy to become one of the all-time great players. He made his Saints debut in March 2004 aged 18 against Widnes Vikings and his inexorable rise saw him represent Great Britain before his 21st birthday.

The 2007 season saw ‘Robes’ named Man of Steel. His statistics from that year provide chilling reading for opposition teams. He was the top man for forward progression notching up over 3300 metres over the season. James was also high in the charts of tacklers, making an average of 26 tackles per match. He also made an impressive 80 busts and offloaded to colleagues 43 times. Amazing indicators, but when you consider that he was only on the pitch for half the match then the mind boggles. That season also saw James become the first try scorer at the new Wembley Stadium as he stepped, broke tackles and powered his way over the Catalans try-line beating five defenders in the process.

🗣️ Hear from the man himself as James Roby sits down with @stuartpykesport in the next episode of Sit Down With Saints to tell us all about his decision to go round again in 2023! ✍️

Watch the FULL 36 minute episode, including a feature with our Saints kit man now… 👇#COYS

The 2008 season saw an acceleration in his try-scoring exploits as he notched an impressive 15 tries over the season. By the end of the 2009 James was closing in on 50 tries for the club.

The 2009 and 2010 seasons proved to be a roller coaster seasons for the Saints. The ride however, ultimately ended in disappointment, despite a 2010 Challenge Cup Semi Final and a fifth successive Grand Final.

Nevertheless the players responded magnificently by reaching an 11th consecutive Challenge Cup Semi Final and a record breaking sixth successive Grand Final. However, a sour taste of disappointment featured as the Saints lost to Wigan in the Challenge Cup and Leeds came back strongly in the last twenty minutes of the Grand Final to dampen the spirits. The season was marked as arguably the best ever for Roby in the red vee.

With Keiron Cunningham calling time on his career, Roby began to start at hooker and invariably full 80 minutes followed. His statistics with this amount of game time were something from science fiction as he topped the charts in several aspects of the game. He was shortlisted for Man of Steel and only narrowly missed out on his 2007 accolade. Again he was the automatic choice as England hooker for the Four nations Tournament at the end of the season.

His 2013 season was disrupted by injury. He had recovered by the end of the season to help Saints progress to the Grand Final, but to no avail. His fitness ensured his automatic selection for England in the 2013 World Cup.

2014 saw James complete another stupendous campaign with the added bonus of a Grand Final win over Wigan and an extension to his impressive collection of honours. Over the next few seasons James continued to demonstrate that he was the most consistent high performing player in the competition.

His selfless efforts were rewarded in 2018 when he was appointed team captain. That season proved to be a sensational one for the club when the side produced some scintillating rugby to capture the League Leaders Shield.

Clearly age is just a number as Roby surpassed 500 career games in August 2020. He went on to lead Saints to back-to-back Super League Grand Final wins after the dramatic victory over Wigan in Hull.

He captained Saints and scored a crucial try in the recent Challenge Cup Final win over Castleford at Wembley and helped lead Saints to a fourth Super League Winners ring in as many years. He will hope to lead the Saints to an unprecedented fourth Super League Grand Final winners ring in a row later this year ahead of signing off in style in 2023.