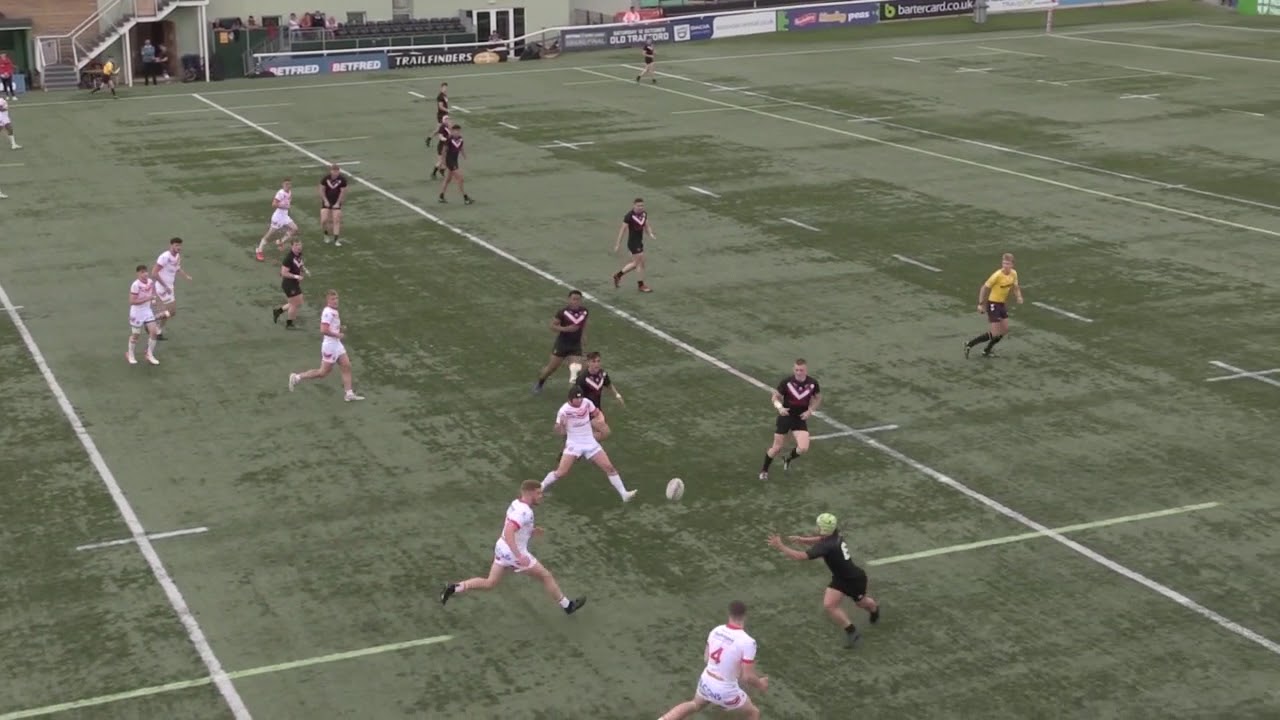 The game, played in bright sunshine in marked contrast to the wet rainy conditions experienced by the first team only minutes later, saw the debut of Brad Holroyd on dual registration terms from Leigh. Having played first team rugby for the Centurions last week he showed his quality with some powerful runs.

Three tries in 14 glorious minutes saw the Saints 18 points to the good and in total control until the game turned on its head in a two minute period.

Nico Rizzelli had opened the scoring after five minutes. Drives out of defence from Tom Nisbett, Sam Royle and Josh Simm saw the Saints on the attack and as the ball was swung left Rizzelli beat his opposite number on the outside on his way to the corner.

Five minutes later and Simm was strolling under the sticks from Jake Wingfield’s short ball four metres out courtesy of a scrum from a Broncos missed 40/20. Lewis Dodd’s simple conversion complemented his fine one off the touchline to Rizzelli’s try.

Minutes later and the Saints left side produced the goods again. Dodd set Rizzelli away and his offload to Matty Foster saw the second row punch through the line. Committing the full back he passed inside to the supporting Dodd to go in under the posts untouched.

But, to their credit, the Broncos responded. Saints conceded a penalty in their own half, but managed to keep the hosts out with some fine defence.

However, in moving down field Ryan Horne’s cut-out pass to his right was intercepted by the lively Broncos stand-off who raced 60 metres to the posts.

On the half hour a short last tackle kick from the Saints was easily mopped up by the Broncos and four tackles later their stand-off was in again as he raced 60 metres down the right edge to score.

The Saints responded as Foster broke the line and again fed Dodd on the inside allowing him to go in under the black dot and convert his own try easily.

The Broncos were the first to score in the second half as Oliver Leyland’s chip, regather and grubber to the corner saw the Broncos draw closer again as the winger touched down in spectacular fashion albeit with a hint of a knock-on.

The Saints hit back straight away. A big hit forced the error and from the scrum on the Broncos 40, drives from Warren Smith and the impressive Harry Brooks put the Saints on the front foot. From the play the ball Nisbett pushed away one tackler and stepped another on his way to the right corner. Dodd missed the conversion but gap was back to 10.

But as ever, the Broncos never go away and back they came. With 15 minutes to go a grubber on the last produced a repeat set. A scrum from a Saints knock down resulted in a scrum 10 metres from the line from which the ball was spread right where the big substitute winger powered his way over.

All of a sudden the Saints decided enough was enough and despite losing two more players to injury shored up the last 10 minutes controlling the game again.

With five minutes to go Josh Simm put the game to bed, punishing a Broncos knock-on and going 90 metres direct from the scrum to score the sixth and final try.