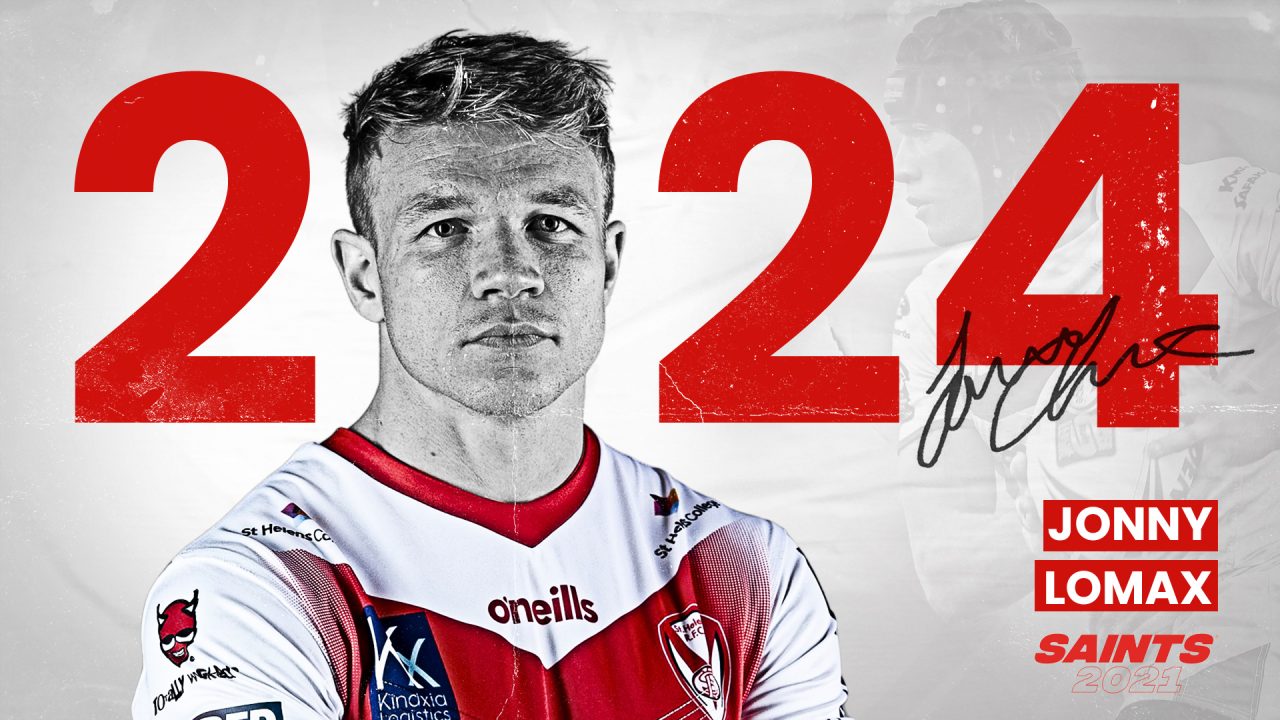 Lomax commits to the Saints until end of 2024

St.Helens R.F.C. is thrilled to have tied down England international Jonny Lomax to a two-year extension to his current contract, keeping him at the Club until at least the end of the 2024 Betfred Super League season.

Lomax has been a one Club man since emerging through the Saints Academy before making his debut in 2009. The half back has gone on to play in four Grand Finals, winning two of them as well as being named in two Super League Dream teams. He was the competition’s top assister last season as he led Saints to back to back Grand Final successes.

On signing his new deal, Lomax, 30, said: “I am delighted. I have been a the Club for a long time now and to sign that two year extension to my existing deal is great.

“I have had my ups and downs whilst I have been here, but now it is about me giving back as much as I can . I want to show the loyalty the Club has shown me as well as the support the fans have given me over the years.

“It’s a dream come true to be at the Club for so long. I signed for the Scholarship back when I was 11 years old and this contract will take me up to nearly 25 years affiliation with the Club. That is something I would have never have dreamed of especially after the back to back ACL injuries which was my third overall so to now get to where I am today and potentially finish my career here is fantastic.” Chairman Eamonn McManus commented: “Jonny has been one of the star players at St Helens and in Super League for a dozen seasons now, but I believe that his best is still yet to come. It’s therefore fantastic news for all concerned that he’s extended his contract and committed to his home town club and to the Super League competition until the end of 2024.

“During both his academy years and in time the first team squad Jonny has had to face and overcome serious injuries which would have finished lesser men; however, his bravery, resilience, and strength of character to overcome these has in turn been reflected in his record of success in the field, both at club and international levels.

“It is no coincidence that the recent years of success of the club have coincided with the consistent form and performances of Jonny. We are lucky to have him and I’m confident that he’ll be at the forefront of more success at the Saints in the years ahead.”

Head Coach Kristian Woolf added: “Jonny is a cornerstone of what St Helens is as a Club.

“He is a real key player for us and along with the likes of James Roby, he is one of the blokes who sets the example in the way he trains and prepares himself for every game. He sets the culture and example for others to follow and is a big part of the team and it is really exciting for everyone that he is going to be with us for a number of years to come.”

Lomax is another star to break out of the Saints Academy and made his debut for the Club against Wakefield back in 2009. He broke into the first team squad on a consistent basis in 2011 before playing in the 2011 Grand Final.

In 2013 he made the full back position his own and immediately established himself as one of the best in the competition, but his 2014 and 2015 campaigns were dogged by a persistent career threatening knee injury.

2016 saw him make a welcome return in an emotional home game against Leeds and was rewarded by playing four times for England. 19 games followed in 2017 and he played for England in the Rugby League World Cup before 2018 saw Lomax switched to stand-off and was named in the Super League Dream Team.

2019 was another stand-out year for Lomax. Not only did he become a father and enjoy a well-earned Testimonial, but he starred in the halves and led Saints to Grand Final glory. His form earned him another spot in the Super League Dream Team and Jonny also named Albert Goldthorpe Winner and represented Great Britain on their first tour since 2013.

Last season again saw Lomax pull the strings in the halves as he topped the Super League charts for try assists in 2020 earning him another Dream Team inclusion, leading Saints to back to back titles.

In total Lomax has made 242 appearances for the Saints scoring 111 tries and over 652 points and he joins Alex Walmsley in signing a new long-term contract extension at the Club.