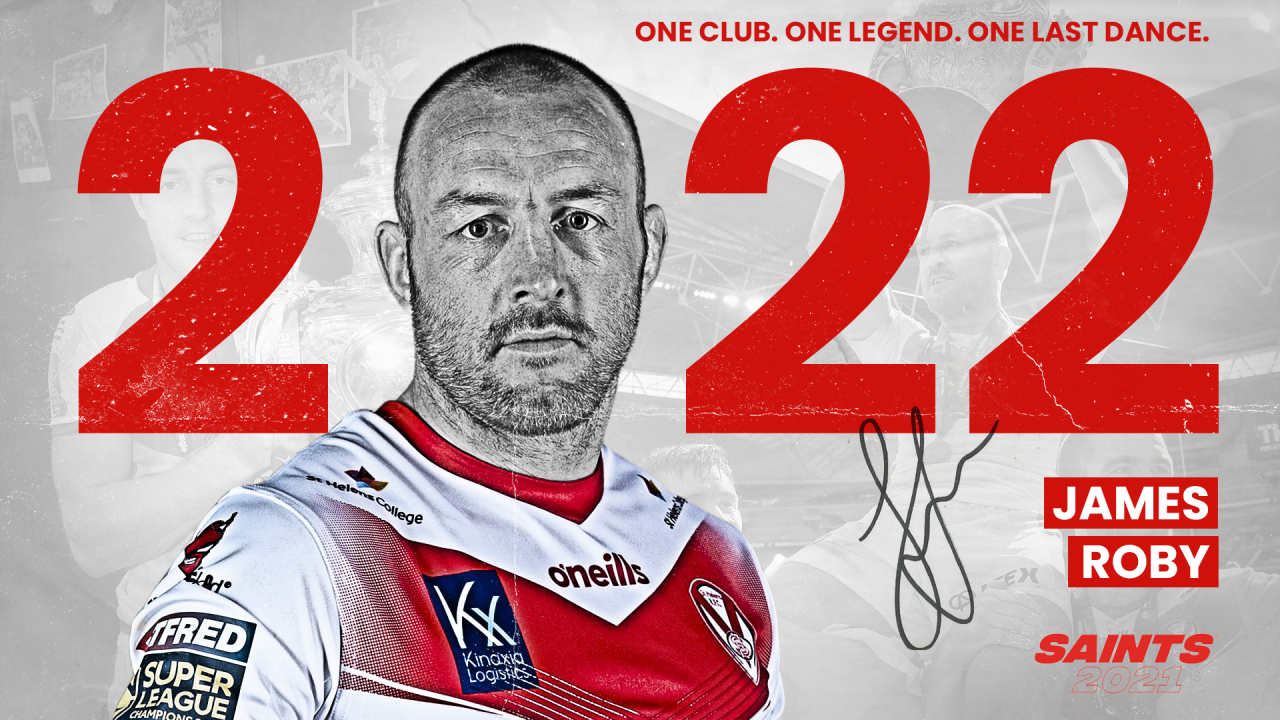 As revealed live on Sky Sports News, St.Helens R.F.C. is delighted to confirm that Captain and Club legend James Roby has agreed a one-year-contract extension meaning he will prolong his career into a 19th season in 2022.

Roby has been a one Club man since making his debut against Widnes in 2004, playing an incredible 485 times for his hometown team thus far, scoring 110 tries.

The legendary number 9, who will turn 36 in November, continues to be one of the best in the game, emphasised recently as his try scoring performance led the Saints to Challenge Cup glory once again at Wembley.

In total he has won four Super League Grand Final rings, four Challenge Cups and a World Club Challenge. He was also named Man of Steel in 2007 and has been named in the Super League Dream team on six occasions.

🗣️ "We've been side by side our whole career and there's nowhere I'd rather be."

James Roby reflects on his decision to play a 19th season at St Helens after spending his entire career with his hometown club and looks ahead to the "exciting" clash with Wigan tomorrow night… pic.twitter.com/DD7V94RaWk

On signing on for another season, Roby, said: “I am very lucky to be a part of this Club and organisation. I am very privileged to play here, to get up in the morning and do what I do.

As you get older you do think the end is near and I knew I was off-contract at the end of this year and thought this could be my last season, but I never saw myself playing anywhere else and if the Club hadn’t offered me a new deal I would have called it a day.

“But I have signed for one more year and I am committed to that, looking forward to it and I believe I still have value to this team. I am excited to go again!

“I am still that young, a local lad at heart. It’s so special to be a hometown lad and as a kid I wanted to play for St Helens and I have been lucky enough to do that for nearly 19 years.”

Chairman Eamonn McManus commented: “James is one of the greatest players in the history of St Helens. He is also our talisman and our leader. It’s great that he’s agreed to extend his career for a further season and there’s no doubt that he will continue to play a key and pivotal role in our success.

We are incredibly fortunate to have him at the club and Saints fans and rugby league fans should cherish him for as long as he continues to grace our club and our sport.”

Head Coach Kristian Woolf added: “It’s great news for the Club and for the fans that Robes will do another year with us. It is a no brainer from the point of view of the footy he has played in the last year and this season. He can still play 80 minutes every week if we need him to and he still has a real impact on the game with his skill set and what he creates and he is a terrific defender.

“It is no secret we are in a bit of a transitional period with some of our younger blokes starting to have more of a presence in the squad and they will have more responsibility next year. So to be able to have a player of James Roby’s calibre, with his leadership, him as a person and the example that he sets – there is no better person in our game to help young players develop.

“It’s great that he wants to do another year and it is something we can all really look forward to. If next year is James Roby’s last year as a player, then that is something we are all privileged to be a part of.”

James Roby emerged from the Saints Academy to become one of the all-time great players. He made his Saints debut in March 2004 aged 18 against Widnes Vikings and his inexorable rise saw him represent Great Britain before his 21st birthday.

The 2007 season saw ‘Robes’ named Man of Steel. His statistics from that year provide chilling reading for opposition teams. He was the top man for forward progression notching up over 3300 metres over the season. James was also high in the charts of tacklers, making an average of 26 tackles per match. He also made an impressive 80 busts and offloaded to colleagues 43 times. Amazing indicators, but when you consider that he was only on the pitch for half the match then the mind boggles. That season also saw James become the first try scorer at the new Wembley Stadium as he stepped, broke tackles and powered his way over the Catalans try-line beating five defenders in the process.

The 2008 season saw an acceleration in his try-scoring exploits as he notched an impressive 15 tries over the season. By the end of the 2009 James was closing in on 50 tries for the club.

The 2009 and 2010 seasons proved to be a roller coaster seasons for the Saints. The ride however, ultimately ended in disappointment, despite a 2010 Challenge Cup Semi Final and a fifth successive Grand Final.

Nevertheless the players responded magnificently by reaching an 11th consecutive Challenge Cup Semi Final and a record breaking sixth successive Grand Final. However, a sour taste of disappointment featured as the Saints lost to Wigan in the Challenge Cup and Leeds came back strongly in the last twenty minutes of the Grand Final to dampen the spirits. The season was marked as arguably the best ever for Roby in the red vee.

With Keiron Cunningham calling time on his career, Roby began to start at hooker and invariably full 80 minutes followed. His statistics with this amount of game time were something from science fiction as he topped the charts in several aspects of the game. He was shortlisted for Man of Steel and only narrowly missed out on his 2007 accolade. Again he was the automatic choice as England hooker for the Four nations Tournament at the end of the season.

His 2013 season was disrupted by injury. He had recovered by the end of the season to help Saints progress to the Grand Final, but to no avail. His fitness ensured his automatic selection for England in the 2013 World Cup.

2014 saw James complete another stupendous campaign with the added bonus of a Grand Final win over Wigan and an extension to his impressive collection of honours. Over the next few seasons James continued to demonstrate that he was the most consistent high performing player in the competition.

His selfless efforts were rewarded in 2018 when he was appointed team captain. That season proved to be a sensational one for the club when the side produced some scintillating rugby to capture the League Leaders Shield.

Clearly age is just a number as Roby surpassed 500 career games in August 2020. He went on to lead Saints to back-to-back Super League Grand Final wins after the dramatic victory over Wigan in Hull.

He captained Saints and scored a crucial try in the recent Challenge Cup Final win over Castleford at Wembley and will hope to lead Saints to a third Super League Winners ring in as many years as his 18th season as a first team player draws to a close.