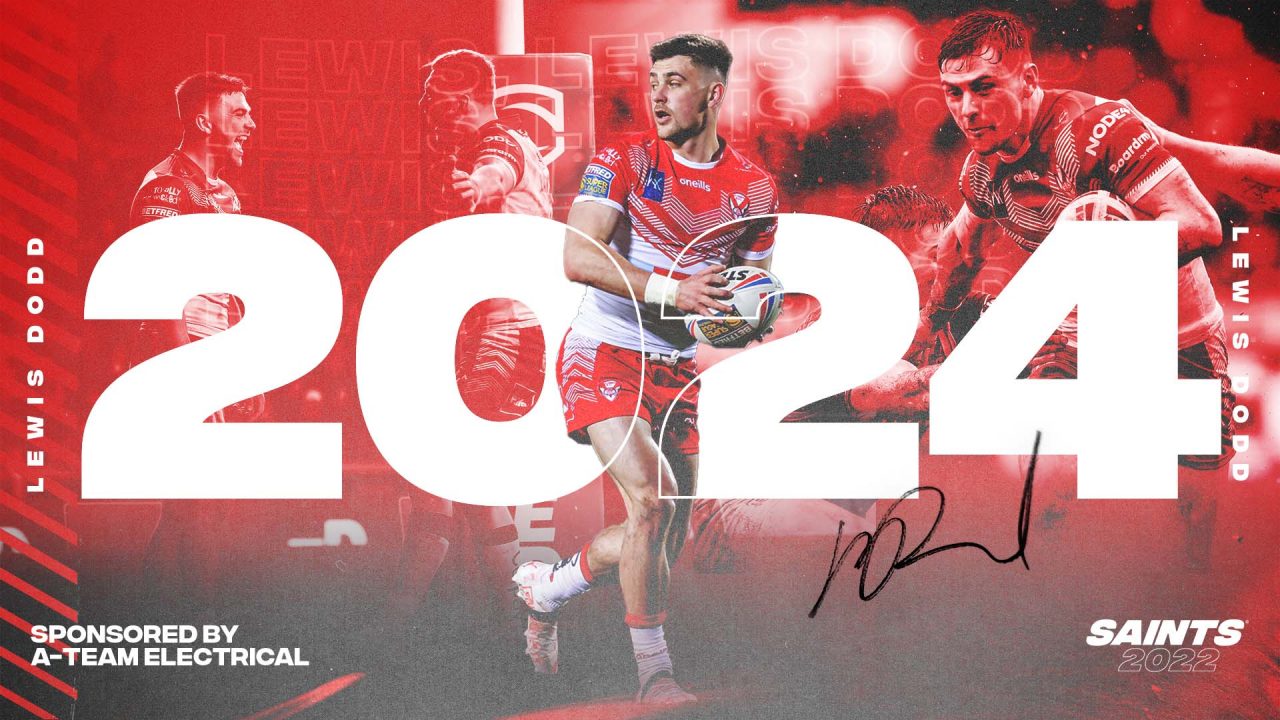 St Helens R.F.C. is delighted to announce that we have secured the future of our no.7 Lewis Dodd who has signed an extended contract with the Club. Dodd’s new deal will see him stay with us for at least the next two seasons with an added option to extend up until the end of the 2026 campaign.

The 20-year-old scored his first Saints try in a 42-0 win over Wigan in 2020. He went onto make 3 appearances before his breakthrough season last year where he played 21 times scoring five tries.

His form and exciting potential was rewarded as boss Kristian Woolf handed him the famous number 7 shirt in 2022 and he was in red-hot form scoring 7 times in 10 games before his season was sadly cut-short after a significant Achilles injury.

Dodd’s form would have no doubt put him in a strong position to feature in the World Cup at the end of the year and the Club have moved quickly to tie the 20-year-old down to a long-term contract.

On signing a four-year deal, Dodd said: “I love this club, this town, this team and the staff involved so it was quite an easy decision.

“I want to thank my family, Academy boss Derek Traynor and of course Head Coach Kristian Woolf who have shown a lot of faith in me.

“To be given the number 7 shirt was a very proud moment for me and my family. Some special people have worn that shirt and it is one that comes with a lot of prestige, so it isn’t something I took lightly.

“I am now on the road to recovery and looking forward to the future. My job now is to get myself fit for next season and that is what I will be doing. Hopefully I will be back out with the boys soon.”

Head Coach Kristian Woolf said: “Doddy is an exceptional signing for the Club. At the back end of last year and this season I believe he was the form half back.

“The likes of Jonny Lomax, Jack Welsby and Morgan Knowles are all quality homegrown Academy graduates and that 1, 6, 7 and 13 combination really complement each other well.

“Doddy fits the type of person we want at this Club too. He is a young man who will only improve and I believe he has the potential to grow into the best half back in the comp.

“He is at the best Club for his development and the length of the deal is a show of faith from both the Club and Doddy himself.”

The talented half back joined the Saints’ Academy from Halton Hornets in 2017 and quickly made his mark in the Scholarship system scoring 5 tries in 9 games before a year later he improved again scoring 8 times in just 7 games.

During the 2019 season, Dodd broke through as a real potential star, leading the Academy to the Grand Final, whilst scoring 21 times in 25 matches and scoring 116 goals during the process.

His impressive form saw him called up to the England Academy squad and received a first team squad number for the 2020 campaign.

Dodd has since gone from strength to strength and is working hard on his rehab to ensure he returns to full fitness next season.