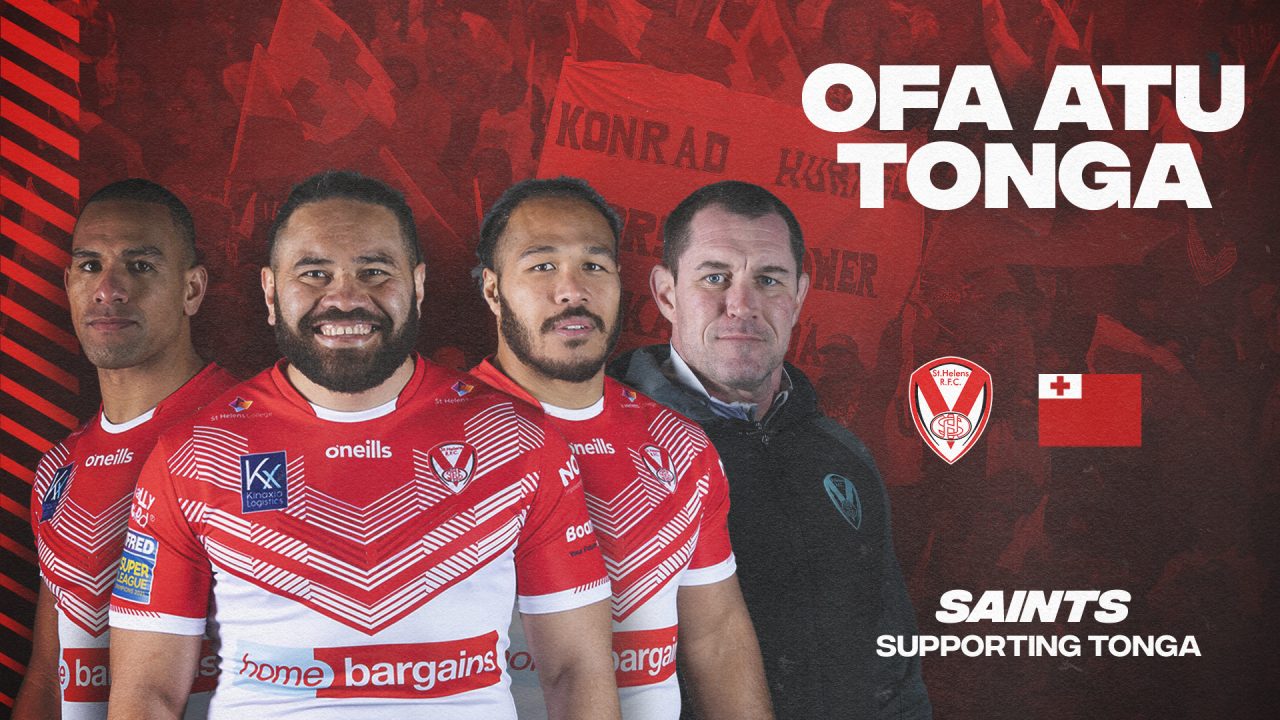 Betfred Super League Champions St Helens have been working hard over the past few weeks to be in a position to now launch an initiative which will see replica shirts and sports equipment sent to Tonga to help provide children with vital clothing and resources after the island was devastated recently following a Tsunami.

On the 15th of January, an ash cloud and tsunami engulfed the islands of Tonga. The tsunami was caused by an eight-minute eruption of the undersea volcano, located about 40 miles north of Tongatapu, Tonga’s main island, on which about 70 percent of the population live.

The Government of Tonga and humanitarian partners reported that the entire population of Tonga (approximately 105,000 people) had been impacted by the ash and the tsunami. The damage created is catastrophic to the people of Tonga, destroying family homes, infrastructure, crops, water supplies, and much more.

Hurrell, Hopoate, a former Tongan captain, and Paasi have all been personally affected with family living in Tonga with Hurrell in particular unable to contact his loved ones for days following the disaster.

WHAT ARE SAINTS DOING?

Over the last few weeks, we have been working hard behind the scenes to secure a large container to ship to Tonga. Fans are being asked to either donate old replica playing shirts, old rugby balls and any other sports equipment or sports clothing as we prepare to ship items over to Tonga to help rebuild their infrastructure which has been completely wiped out.

The Club will be kicking things off by supplying 250 shirts from our existing stock whilst our St Helens players will also be donating old training gear and other sports/clothing items to our friends in Tonga.

WHERE CAN I DROP MY DONATIONS OFF?

Those who play for local Community Club’s please drop these off with your St Helens Rugby League Committee Member who will arrange for these to be added to our container for transport.

Please also ensure all clothing has been washed and is clean, whilst any rugby balls are deflated for transport.

Please DO NOT try and drop off at the Totally Wicked Stadium or Saints Superstore. We unfortunately cannot accept donations here.

The deadline for all donations set for Thursday 31 March.

We will then work with partners Home Bargains and charity the Red Cross to ship the container to Tonga with YOUR donations making a huge difference to their people after the volcano-hit island was left in ruins. By doing this we will at least be helping their people play sport again on the Island both within their communities and schools.

“We have a real strong connection with Tonga and its people.”

Saints and Tonga Head Coach Kristian Woolf said: “We as a Club obviously have a real strong connection with Tonga and its people. We have three Tongan players and myself as Head Coach of Tonga. We are also the base for the Tongan team come the World Cup and I think we are a team that the St Helens people are really going to get behind and it is important that we support them through some really difficult periods.

“They are trying to re-build their country off the back of this disaster and this is our way of showing we are right behind them and that we really support them and we want to see them get back on their feet. They will bring a lot of joy to us as a rugby league team and as a country at the end of the year in the RLWC so anything you can do to help would be much appreciated.”

Tongan international, Konrad Hurrell added: “I am the youngest of six kids and we didn’t have much back home. We used to play rugby with plastic bottles and sandals. We didn’t have much but we still found a way to come together to get through stuff and that is what we need to do now.

“The Tsunami, volcano, the ash and waves has ruined everything in my country; the crops, the electricity, our water, our homes have all been ruined. We have to restart our life again in Tonga. Everyone is trying to get back on their feet again now.

“On behalf of myself, Will [Hopoate], Agnatius [Paasi] and Woolfy [Kristian Woolf], we are Tongan’s and we are all asking for your help. If you can donate rugby clothing, equipment 0r boots, I know my little island of Tonga would be so appreciative,” he continued.

“A lot of people across the world are going through tough times at the moment and we hate asking, but it is a time we all need your help and we would all appreciate it – whatever it is, small or big, it will help our people in Tonga.

There is also a fundraising page for those who do not have equipment or clothing to donate.