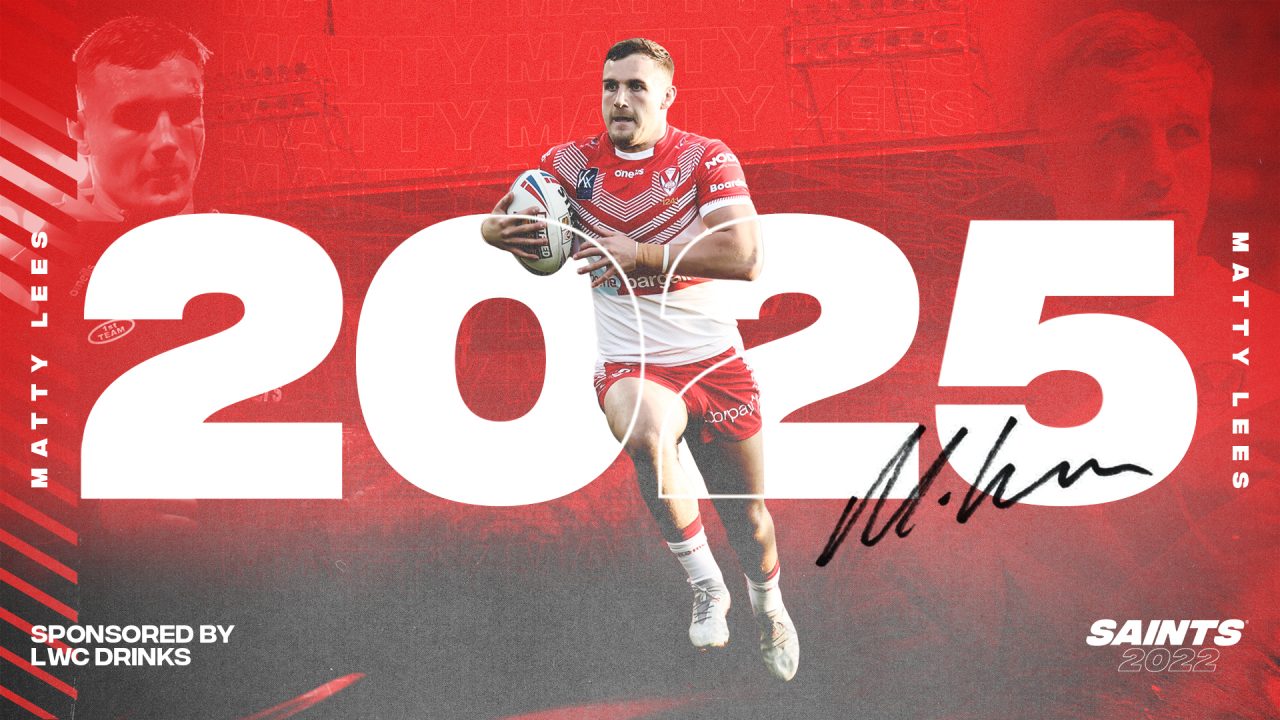 Lees to lead Saints pack for next three years

Exciting prop forward Matty Lees has signed a three-year contract extension at Saints, with the option of a fourth year, meaning he will stay in the Red Vee until at least the end of the 2025 season.

Lees has been a mainstay in the Saints forward pack in recent years and at 24 years of age, has his best rugby ahead of him in the Red Vee with the Club seeing him as one of the leaders of our pack moving forward.

Head Coach Kristian Woolf said: “The retention of Matty is great for us as a Club. He has shown over the past 12 to 18 months his ability as a starting front rower and he has earnt that spot in our team.

“He complements Alex Walmsley and Morgan Knowles really well and we also see him as having his best footy ahead of him. He is a young man as a front rower who is only going to get better. He is very athletic, very physical, and aggressive and over the next few years I think we will certainly see the best of him.

“He will grow into a leader of our pack and continue his improvement with us.”

Rochdale born Lees, joined up with the club at the age of 16. His debut followed in 2017 and he cemented his place in the first team squad a year later playing 19 times under former coach Justin Holbrook and was named Super League’s Young Player of the Year in 2019.

Unfortunately his season was cut short and he missed out on the Wembley Challenge Cup Final and Super League Grand Final after he suffered a perforated bowel against Leeds Rhinos. Wayne Bennett had confirmed he would have been called up for Great Britain had he not picked up the injury.

But Lees bounced back in 2020, making 20 appearances and a further 15 last season. He has made 13 in 2022 for a total of 95 Saints appearances winning two Betfred Super League titles and one Challenge Cup.

On signing his new deal, Lees said: “I am made up. It is such a great Club, the history and everything we have won over the last couple of years means I am just made up to sign again and I am looking forward to the next few years here.

“Thanks to Mike [Rush] and Eamonn [McManus] and of course Kristian Woolf and all the backroom staff who have all played their part – especially with my injuries in the past. It is always a worry with injuries, and it was a difficult time, but I am happy I got through that and put myself in a position where I was able to get that 10 shirt and kick on.

“Coming through the Academy, it was a dream to get that starting jersey and now I have got it, I really feel like it is going to be a good challenge for me to lead this forward pack in the years ahead.”

Lees has been a member of the England Knights squad, but was promoted to the senior training squad earlier this year ahead of hopefully earning a place in Shaun Wane’s Rugby League World Cup squad at the end of the year.